Usage of Pesticides in Farming

1.1 Background of the study

Bulb onion (Allium cepa L.) has lot of varieties, one of it is the red onion which is basically the most accessible on markets. Red onion is mostly a need kind of spice for our everyday cooking, it can also be of use in medical purposes. Due to its market demand, Philippine government imports red onion because it lacks on local production for a reason that traditional farming of red onion highly dependent to weather conditions and its production expenses is high for an ordinary farmer.

Don’t waste time
Get a verified writer to help you with Usage of Pesticides in Farming
Hire writer
$35.80 for a 2-page paper

It grows well in friable and well-drained loam soil with good water holding capacity and pH between 5.8 – 6. For best growth and bulb quality, onion requires cooler weather during the early stages of growth and a dry atmosphere to moderately high temperature for bulb development and maturation. (Department of Agriculture, Regional Field Office No. 02, High Value Crops Development Program)
Hydroponics is a method of growing plants in water base-nutrient rich solution, it does not use soil but instead the root system is supported using an inert medium.

Growing with hydroponics greatly increased rate of growth in your plants. Your plants will grow bigger and faster because they will not have to work as hard to obtain nutrients. Even a small root system will provide the plant exactly what it needs, so the plant will focus more on growing upstairs instead of expanding the root system downstairs. (fullbloomgreenhouse.com)
Deepwater culture system is the type of hydroponic used in this study, the only difference is that in the normal Deepwater culture it uses water pumps.

In this research, the water is measured enough for the entire growth or until harvest and the nutrients are added good for the whole life cycle of red onion. This method is the process introduce by Dr. Primitivo Jose A. Santos, in which they produce their own nutrient solution and the water is added to the nutrient, then the mixture is use from day1 until harvest.
This study presents automation on indoor hydroponics growing of red onion plant that involves sensors that checks the humidity, temperature, PH level of water used as base and its light requirement for a certain stage growth of red onion plant. From planting until harvest, the production will be monitored automatically and all the readable data sensors will be sent to the online database via the Wi-Fi module to have an access to set controls just by using your phones or personal computer.

1.2 Statement of the Problem

The Philippine production of red onion can’t cope up with the high demand on local market that is why importing the product is the main alternative of the government for a reason that local farmers are afraid to take the risk of growing red onion because of some reason that includes its sensitivity on temperature at early stage and of its labour cost. The study presents a hydroponic growing that automatically monitors the needs of the plants and data that are gathered can be acquired in your phones or Personal Computers that extracts load of works. Instead of constant checking on the growth and needs of your plants personally, the research aim to create website that stores the data collected inside the location of your plants and sends the data automatically on your device.

1.4 Significance of the Study

The study aims to drive the attention of local farmers to risk on planting red onion as its growth process will be much easier through hydroponics and its cost in land preparation and pest control can be eliminated, it is less hassle on monitoring its sensitivities as the research goal is to have a monitoring system that automatically fill in the needs of the plant at a specific time and conditions. By this automation, the producer can minimize his or her expense on labour cost, pesticides and can save a lot of water consumption.

Growing a sensitive and costly plant may give a lot of farmers to have a second thought on producing the said variety, for a reason of its risky method, weather condition for the plant, its cost from planting to harvest and so with the quantity of the laborers or workers needed. Red onion is a no exception to this matter, it is one of the demand spices in the market but less in local production that’s why local government imports from foreign countries. The study is to create an alternative approach on observing the data’s on producing red onion and attending to its needs in just one click away in a hydroponics method of planting in indoor surroundings.
The figure above shows the process from the Deepwater Culture type of hydroponics for red onion plantation. Sensors are placed in the room like LDR sensor, PH sensor, Humidity and Air temperature sensor that are connected to an Arduino to have an easy access of the records of changes in the room or in the plant growth. The Arduino is the medium to collect the data and transfer it through WIFI then send it to the producers’ device. The owners’ device will serve as the data storage and a controller of the sensor’s adjustments base on plant needs.

Hydroponics does not use soil, instead the root system is supported using an inert medium such as perlite, rockwool, clay pellets, peat moss, or vermiculite. The basic premise behind hydroponics is to allow the plants roots to come in direct contact with the nutrient solution, while also having access to oxygen, which is essential for proper growth. Types of hydroponic system includes; Deepwater Culture, Nutrient Film Technique, Aeroponics, Wicking, Ebb and Flow and Drip System.

1.5.2 Type of sensors
LDR Sensor
A Light Dependent Resistor (LDR) is also called a photoresistor or a cadmium sulfide (CdS) cell. It is also called a photoconductor. It is basically a photocell that works on the principle of photoconductivity. The passive component is basically a resistor whose resistance value decreases when the intensity of light decreases. The basic structure of an LDR is shown below.\n\n
The equation to show the relation between resistance and illumination can be written as
R = A.Ea
Where E – Illumination (lux)
R – Resistance (Ohms)
A,a – constants
The value of ‘a’ depends on the CdS used and on the manufacturing process. Values usually range between 0.7 and 0.9.
PH sensor
A pH sensor helps to measure the acidity or alkalinity of the water with a value between 0-14. When the pH value dips below seven, the water starts to become more acidic. Any number above seven equates to more alkaline. Each type of pH sensor works differently to measure the quality of the water. The pH of water can help determine the quality of water. Measuring the pH can also provide indications of pipe corrosion, solids accumulation, and other harmful by products of an industrial process.
Humidity Sensor
A humidity sensor (or hygrometer) senses, measures and reports both moisture and air temperature. The ratio of moisture in the air to the highest amount of moisture at a particular air temperature is called relative humidity. Relative humidity becomes an important factor when looking for comfort.
Arduino
It is an open-source platform used for building electronics projects. Arduino consists of both a physical programmable circuit board (often referred to as a microcontroller) and a piece of software, or IDE (Integrated Development Environment) that runs on your computer, used to write and upload computer code to the physical board. The Arduino platform has become quite popular with people just starting out with electronics, and for good reason. Unlike most previous programmable circuit boards, the Arduino does not need a separate piece of hardware (called a programmer) in order to load new code onto the board — you can simply use a USB cable. Additionally, the Arduino IDE uses a simplified version of C++, making it easier to learn to program. Finally, Arduino provides a standard form factor that breaks out the functions of the micro-controller into a more accessible package.\n

The whole operation is done in an enclosed environment and if possible, no human intervention until harvest is the goal of the study. The figure shown above illustrates the flow of data from the sensor and connects to the Arduino that will serve as the controller of the desired output such as the needs of the plants like the intensity of the light and the temperature needed.\n \nFigure 1.6.2 shows the process of the sensors as the input and its output is to control the intensity of light and the level of air temperature. All of the switching of those matters are done inside the Arduino, the Arduino will send the data to your personal devices via WIFI and the personal device will serve as the remote to control the adjustments of light intensity and air temperature.\n\n1.7 Scope and Limitation\nThe study presents automatic responses on the needs of an indoor hydroponic method of planting red onion. The data, such as monitoring PH level, Temperature, humidity and Light requirement are sent via WIFI to your personal devices. Your personal device will serve as the controller on attending or filling in the needs of the red onion. The Limitation of this study is that it is in an enclosed space and a particular method of growing, which is hydroponics for this study is used in a specific type of plant and that is red onion bulb.

Usage of Pesticides in Farming. (2021, Oct 31). Retrieved from http://envrexperts.com/free-essays/essay-about-usage-pesticides-farming 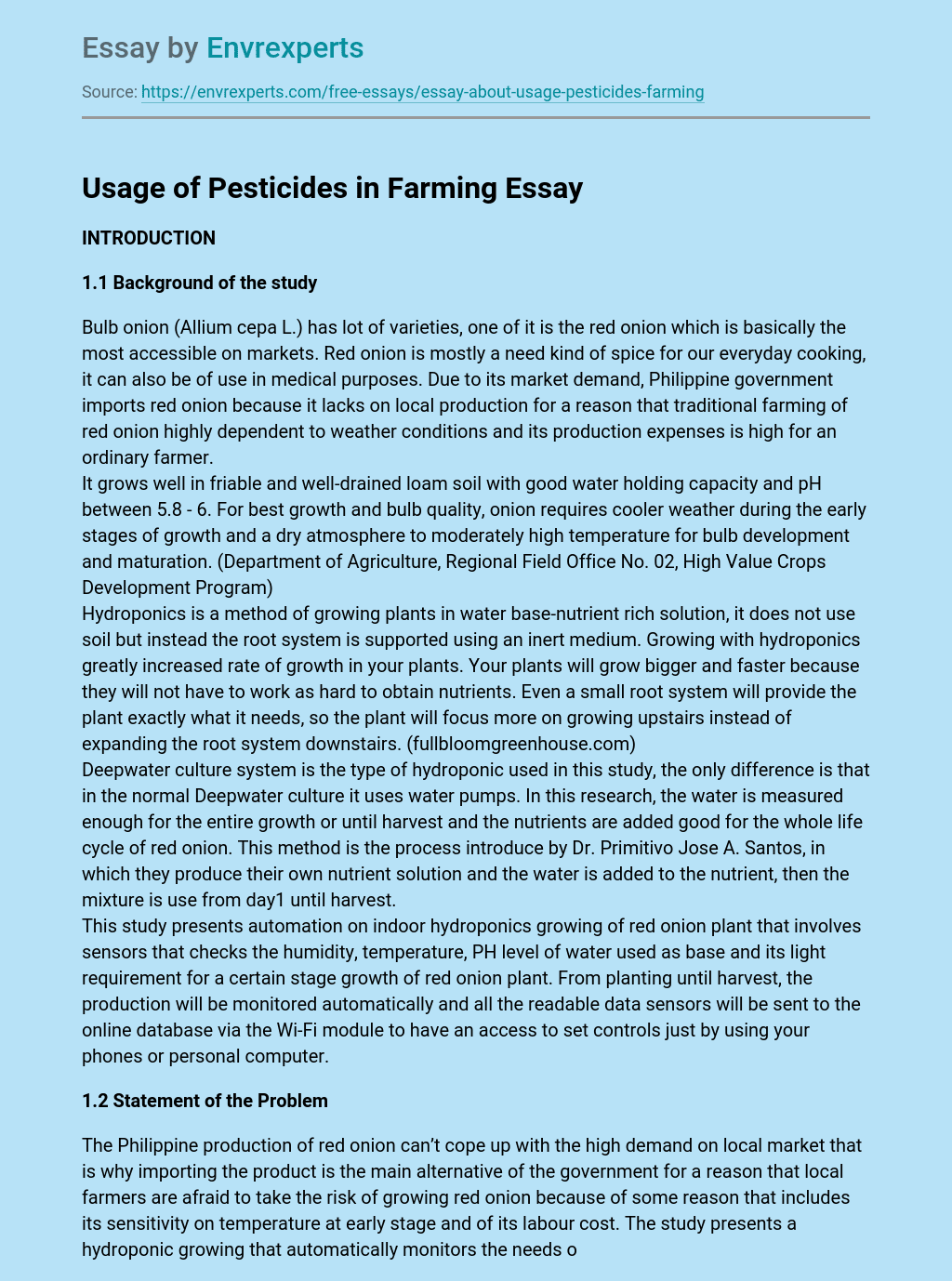