Usage of Solar Energy in Agriculture

The drying process is one of the methods used to dry in order to reduce wastage of the produce. During drying the changes that occur in the produce are: the shape, size, texture, colour and shrinkage.

Don’t waste time
Get a verified writer to help you with Usage of Solar Energy in Agriculture
Hire writer
$35.80 for a 2-page paper

Solar drying technology is one of the better drying methods mostly used in developing countries as it is able to dry produces with better quality. It is different with the open sun drying by construction as it designed with components that enhance the collection of solar radiation in order to dry efficiently.
The advantage of solar dryers is that they are able to generate high temperature with lower relative humidity which are required to improve the drying rates and lower final water content in the produce. According to MONGI RJ (2013) the drying time can be reduced by 65% compared to open sun drying because inside the solar dryer it is warmer. In turn the spoilage becomes less and reduced microbiological infestation making the produce to have better product quality. However, the biggest disadvantage of solar drying technology is its dependency on weather for drying operation.

1.2. Capturing of the solar energy

Solar radiation or sun rays can be converted into either thermal energy or electrical energy. This is possible with the use of thermal conductors for converting to heat energy or photovoltaic collector for conversion into electrical energy.
When the solar dryer has electrical components there will be two collectors to be used to capture solar energy and conversion to thermal energy. Solar collectors are mostly flat which are of glazing material put at an angle depending on the direction of sun rays. Solar panel are used as photovoltaic system which will absorb and convert the solar radiation to electricity and supply it to the electrical components such as fans.

Solar dryers can be divided into two categories base on their air circulation which are:

A forced conversion solar dryer utilizes solar energy as the primary heat source and has ventilators for circulation of air in the drying chamber. Incorporating fans in the system improves air circulation and that in turn gives higher drying rates compared to open sun drying and natural conversion solar dryer. The better airflow is achieved by electrical components. A forced conversion solar dryer consists of a solar collector, drying chamber and a fan or pump for air circulation; figure 3 depicts a solar collector with a fan to force air in. They are mainly used in larger commercial purposes and large-scale farming. This type of dryer is suitable for the drying of produce with higher moisture content.

With this type of a solar dryer the air is heated and circulated naturally due to wind pressure and buoyancy force. This solar dryer consists of a solar collector, a chimney and drying chamber. Passive solar dryers are mostly used in the developing countries and tropical regions which practise small scale farming. They are preferred because they are inexpensive, easy construction and lastly their independence to the electricity grid thus there are no electrical components in the system. For a passive solar dryer shown at figure 3 its solar collector does not have a fan. Passive solar dryers are mostly for drying small batch of fruits and vegetables.
The drying period is less with higher throughput compared to that of sun drying and this yields higher production of dried produce with better quality compared to sun drying.

According to Khuthadzo (2015), the efficiencies of passive and active solar drying are nearly the same but differ with the drying rates. Figure 3 shows the drying time of forced air circulation(active) and natural (passive) solar drying. However, the active solar drying is considered most of the time because of its better drying rates but the electrical components increases expenses. So, this project intends to develop a solar dryer based on operation and one that is economical based on budget.

Factors which are considered to influence the drying process:

In order for the moisture to be removed in the produce, the air velocity is recommended that it should be in the range of 0.5−1.5 ?/? and the volumetric flow rate which is better for heat transfer is 0.75?3.?−1. However, researchers found that the airflow has little effect on the drying rate (Khuthadzo, 2015).

1.6. Factors that can affect the performance of a solar dryer

1.6.2. Orientation of the solar collector

1.7. Sub-system of the solar dryers

Sub-systems of the solar dryer.

The drying chamber is an enclosed container where the produces are placed inside for drying and it is insulated and sealed to reduce the heat loss inside.
The chamber has a number of trays for placing the produce evenly which allow the operator to be able to load and offload produces. The trays are made of
material safe for food contact and handling by the operator. There are door(s) which are incorporated in the chamber usually placed at the back side of the
dryer. Figure 4 shows a drying chamber.
A drying chamber operates by adding hot air inflow at a wanted flow rate as the hot are flows it heats up the produce inside and then the moist air is
released. The temperature range of drying chambers is generally between ambient temperature of 5 degree Celsius lower limit and around 300 degree
Celsius as the upper limit, but there are already units which can go above that and enable temperature less than 0 degree Celsius depending on what it will
be used for.
The sizes of drying chamber unit are different according to application. The smallest unit holds around 30 litres and the large one can hold several hundred
litres.

As there is a high temperature generated and lower relative humidity than ambient conditions in the drying chamber, so to control the temperature inside
an exhaust is needed to release the hot air inside. A chimney is often used to channel the hot air out that picked up moisture from the produce in the
chamber. For air to flow through out, the air which is inside the drying chamber must have a higher temperature than the ambient air so that the density of air
outside is greater than inside in that way there will be flow of air out of the system and the drying temperature will be maintained. It was found that when
a wind ventilation system is installed the solar dryer’s efficiency be improved from 31.2% to 46.7% (Khuthadzo, 2015).
Most of the time forced air convectional solar dryer use a chimney and fans as the ventilation system whereas, natural convectional solar dryers use only
chimney as the ventilation system.

1.8. Efficiency of the solar dryer

The materials which are used to design the glazing material are plastic and glass. They are considered because of the better absorption and transmission
and reflection. Plastic is more efficient than glass because is able to transmit 0.4 of the short-wave and long-wave. However, the disadvantage of plastic is
its limited life span. Glass is able to transmit the upcoming short-wave radiations and long-wave radiations of about 90% and has a better life span
with that regard it will be considered.

Absorber plate needs to be made of a material that has a high thermal conductivity. The materials which are considered for high thermal conductivity
are copper and aluminium and with their surface coated. A black paint on the surface is used as it has absorption rate of 0.92-0.98 (Khuthadzo, 2015). The
surface that is considered to have as a good absorber has a high infrared emittance and good radiator of heat which is why black surfaced material is
good.

Usage of Solar Energy in Agriculture. (2021, Oct 31). Retrieved from http://envrexperts.com/free-essays/essay-about-usage-solar-energy-agriculture 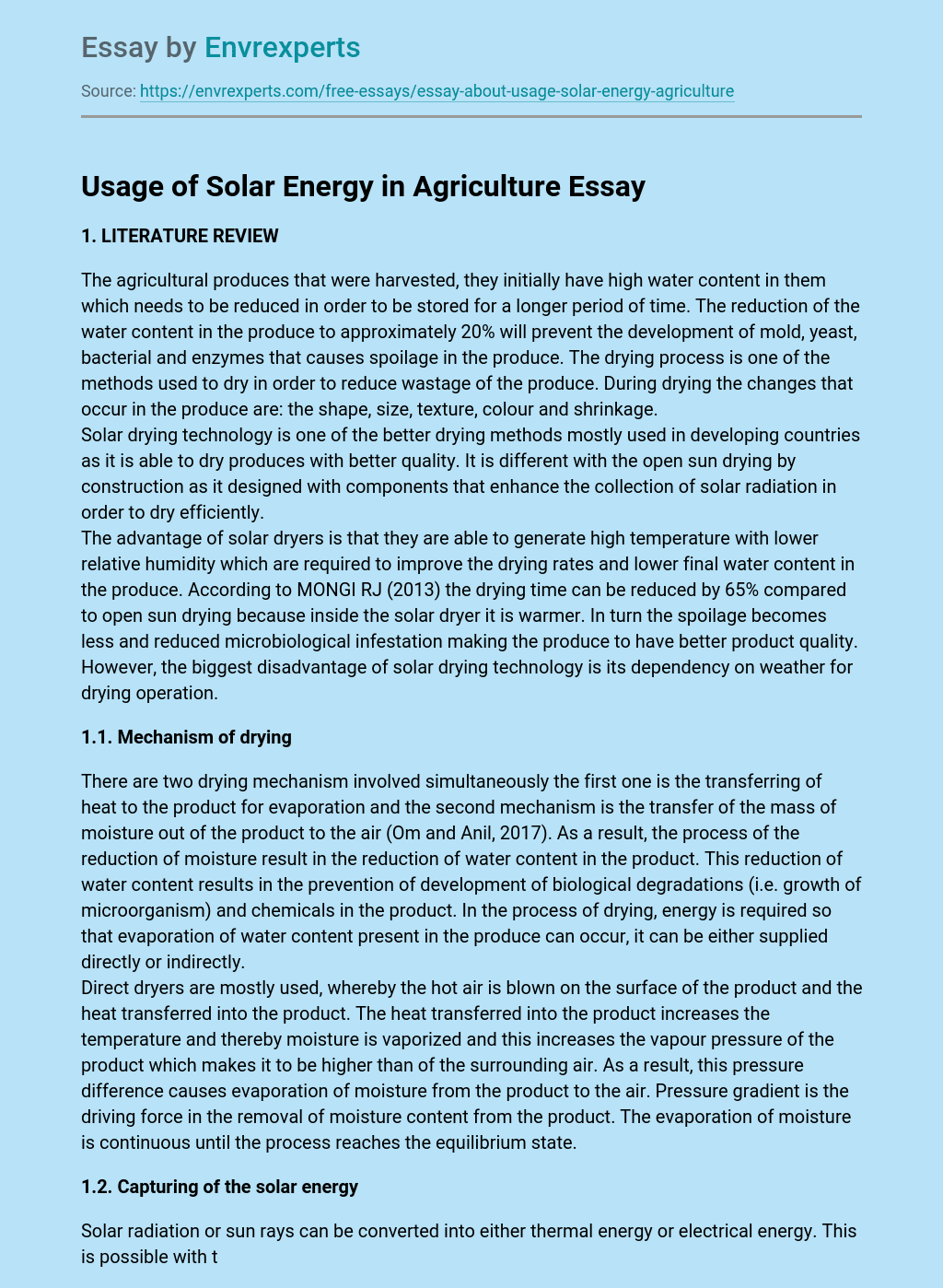