Use of Natural Resources of Tribal People

The Traditional Village Council of Wanchos and the Wancho Chieftainship (Wangham) With their unique nature the tribal groups are mostly the aboriginal and native people of the region, the tribal can be characterize as a group of people or a community shares numerous resemblance as mention in a Imperial Gazetteer of India ‘A tribe is a collection of families bearing a common name, speaking a common dialect, occupying or professing to occupy a common territory and is not usually endogamous though originally it might have been so’.

Don’t waste time
Get a verified writer to help you with Use of Natural Resources of Tribal People
Hire writer
$35.80 for a 2-page paper

The tribal groups thus have a common identity of culture, customs and tradition they generally are indigenous to their land and accordingly enjoy the natural resources at the same time protecting those resources, therefore it happens that many of the tribal culture and traditions were a mere by-product of the geographical features like climate, soil type, hilly or valley, river side, etc of that particular tribal populated area such as their food habits, customs and rituls, dressing pattern, even dialect and other socio-economic way of life.

Being a part of India’s north-east where a tribal populated states shows its majority, a state of Arunachal Pradesh with a vast territory where almost all the parts are inhabited by diverse tribal groups consisting numbers of major tribes and sub-tribes having their own distinct culture and tradition. Similar to many other tribal groups of the world each indigenous tribal society of the Arunachal Pradesh do exist with some manner of indigenous traditional institutions despite the fact that those may got effected by the process of post-colonial model of modernization and other foreign elements, the indigenous people still maintains and tries to preserve their socio-cultural and to some extent even political-administrative activities facilitated through these indigenous traditional institutions and organizations.

These traditional institutions used to play a significant roles in every aspects of tribal life in early days, engaged in every sphere of socio-cultural, political-administrative, economic and religious activities therefore such dynamic nature of these structures and arrangements cannot be completely called merely as the political or administrative organizations neither as only socio-cultural institutions moreover there is an unclear separation in context of traditional institutions between all these realm of activities. Looking into the traditional institutions of tribal groups in aspect of decision making body the following name such as Traditional village council, Tribal council or Village assembly have been commonly used by various researchers and scholars. In respect to traditional village councils of different tribes of Arunachal Pradesh ‘all the councils have certain features in common.

They all derive their authority from ancient times and the fact that they are the expression of the will and power of the whole people’. (Demo in NEFA p-18) They might be vary in their nature or have structural-functional differences some had democratic features in form of structural system like the Kebang among the Adis, others like Bang-Ngele of Nyishi tribal group and Abbala of Mishmi had a gerontocracy based village councils where the head of the councils is generally the aged known elder and among the tribal groups like Wanchos, Noctes and Singphos practice a Chieftainship system of Village councils under which the tribal Chiefs played a front role.

A theocratic with democratic nature of traditional village councils present in a form of Tsorgens of Mompas and theocratic with Chieftainship follow among Khamti community. Traditional Village Council of Wanchos: The Wancho is one among the indigenous tribal communities of Arunachal Pradesh, concentrated largely in Longding district which was earlier as part of Tirap district till February of 2012 when it got curved out and formed a new district of the state. There is a lack of any historical record in written form among the Wanchos however the orally defined myths and legends passing from generations serves as resources related to their origin and migration into their present territory, ‘from the information available in different Buranjis, it may however be said that when the Ahom King Sukhapaaa first came and established his kingdom in Assam sometime in the first half of the 13th century AD [1228] the Wanchos were there in occupation of the area.’ (The Wanchos p-17)

On the basis of the migration from the place which in a different ways narrated by different Wancho villages, the Wancho people broadly can be divided into two groups known as Tang-jan and Tsang-jan, basically upper Wancho and lower along with middle Wancho in modern sense, among these groups there are also further division of more groups (Jan) or group of villages. Under Tang-jan following Jans such as Kon-jan, Chau-jan, Kha-jan, Nyi-jan, Kamhua-jan and under Tsang-jan there are Niua-jan, Mao-jan, Chop-jan, Ru-jan and these jans are based on the relationship of the groups of villages or the alliance villages under one paramount (nu) village. The Wancho people shares a degree of ethnic relation with the Noctes of Tirap district and the Konyak tribe of Nagaland primarily because of the topographical familiarity, the socio-cultural and to some level the similarities of village level traditional political-administrative system can be observe between these tribal groups.

‘The Konyaks have hereditary Chieftainship, the Konyaks Chief are called the Angs’. (SPIHPNEI J.sarkar p-98) Chieftainship is the most important institution of Nocte social organization. Each village has a Chief who is the hub round whom all social, political, administrative and religious activities of the village community revolve’. (P.dutta P-120)

Origin and Evolution of the traditional village councils of Wanchos: The traditional village councils are those institutions and structures naturally born out of the society itself. The inventiveness of the society once exist resulted the establishment and arrangement of the institutions which they considered necessary appropriate at that moment. ‘Human society rests upon instincts established by natural selection during the long pre-human stage of man's evolution. These instincts were the basis of all the primitive forms of association among men, and the addition to these of the intellectual elements of language, abstract ideas, self-consciousness, and reason is what gave rise to the peculiar products of human social evolution, human institutions, and civilization’. (Origin of society)

The early societal institutions incorporate all those elements which they can accommodate within and continuously modified its nature and functions. ‘Social organization, customs, and institutions rest fundamentally upon instincts which have grown out of the necessities of the life-process, these instincts and the habits which grow out of them are modifiable by intellectual elements, especially in the young’. (Origin of society) With the passing of generations and the modification of environment the components of the society are also subject to transformation moreover many of the primitive institutions principally concerning to the tribal indigenous institutions are complex and dynamic in their nature, extended their jurisdictions into almost every realms of socio-cultural, political-administrative, economic activities of life.

However tribal societies earlier were missing of any fixed demarcation between these spheres of activities of life which they somehow slightly illustrate in contemporary period too. Discussion on indigenous institutions Watson (2003), which defines indigenous institutions as "those institutions that have emerged in a particular situation or that are practiced or constituted by people who have had a degree of continuity of living in, and using resource of an area". (Jstor)

As an attribute of culture, customs, traditions and predominantly created to regulate the societal norms and values, the indigenous institutions also is a reflection of the physical environment present and available to the society, the topographical features in form of hills, forest, valleys or river-side defined and redefined the cultural-traditional practices generates the social and economic happening which later give shape to political-administrative circumstances and necessity in respect to intra-society or inter-society relationships, decision making process regarding various socio-political and economic activities, regulation of customary norms, etc which depends on society to society.

Belong to the hilly region of the Patkai range the Wancho tribe are not exceptional in case of genesis of their traditional village level institutions, the sources are still accessible in forms of myths, legends and rituals prevails among the people of Wancho villages. The way Wancho tribal life were organized and arranged under the supervision of traditional institutional system, The Paa (Traditional Institution, references) an another major institution of Wancho villages apart from the traditional village councils, the Paa or Paa-nu (Wangham’s Paa) performs a mixture of functions, at times act as executive branch under the guidance of the traditional village council specifically during the old days of warfare between different villages also initiating the process of socialization and cultural education of the people related to the roles and duties of the village members, norms, values and different duties related to respective clans, gender roles and duties, etc.

Along with the other institutions the Wancho tribal Chief called Wangham is something very significant office or position among the Wanchos, who had huge roles and responsibilities in relation with the village institutions and subsequently had parts in every village activities. The office of the Wangham and traditional institutions of Wanchos cannot be strictly divided since all has complementary functions with a harmonizing nature of existence. The origination of most of the traditional village councils of the tribal groups of Arunachal Pradesh was beyond the reach of people’s memory and record hence existence of these institutions is believed to be since time immemorial.

Do you think that the traditional village councils of Wancho villages exist since time immemorial? Respondents Responses Total Yes % No % Can’t say % Total The example of some of the village councils of various tribal groups having both immemorial origination and exact time and period of its genesis. Evolution: A complex and dynamic nature of the society makes it compel to transform its shape and size, therefore the society is subject to change according to the changing circumstances and needs of the situation. The changing could be positive or negative in nature, the positive change may include the developmental growth, modification or advancement, accumulation of progressive ideas all which contrast with the negative change of stagnation and extinction.

The evolution process in context of traditional village councils of the tribal groups is multifaceted, experiencing both the positive change of progressive growth and development harmonizing with the modernization at the same time negative change in form of facing the challenge of cultural-traditional stagnation or even extinction. However the new generation members of various tribal groups continuously trying to have a sustainable approach of growth through preserving cultural identity along with enjoying the profits of modernization.

The evolution of the traditional village council of the Wanchos shares a similarity with the other tribal groups of the Arunachal Pradesh for that matter the tribal of north east India, particularly after the intervention of the British Indian Government through various acts and regulations concerning to tribal inhabited areas of present northeastern part of India. Thus the phases of evolution took places rapidly during British period in India and also after the post-independence period of independent government of India.

Therefore to have a broader outlook over the different steps taken up by both the governments and how they gradually affected the traditional institutions directly or indirectly, the following acts and regulations are to be discussed: The Assam Frontier (Administration of Justice) Regulation, 1945 The North East Frontier Agency Panchayat Raj Regulation, 1967

Use of Natural Resources of Tribal People. (2021, Oct 31). Retrieved from http://envrexperts.com/free-essays/essay-about-use-natural-resources-tribal-people 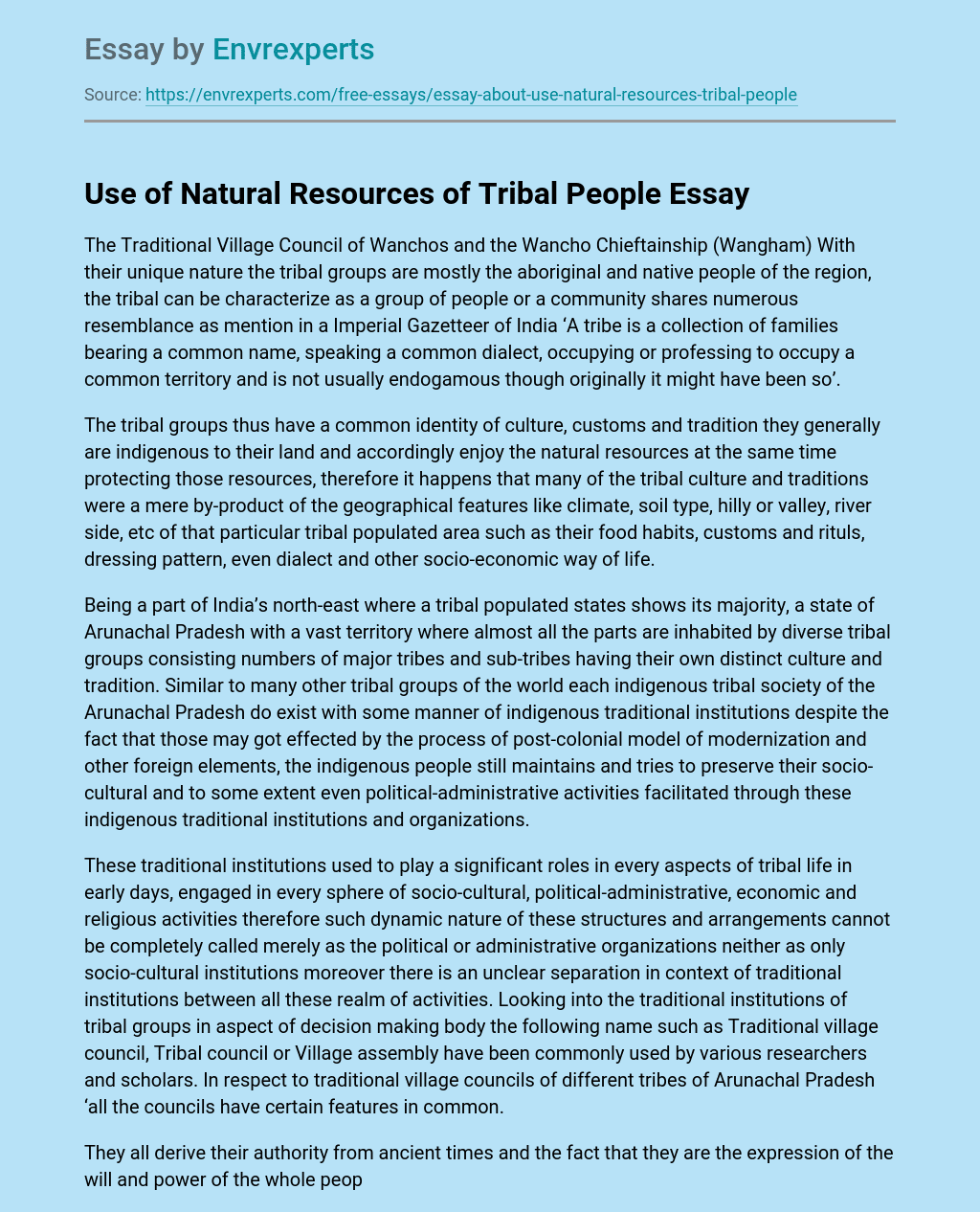