The Vermont State Game Wardens is a division of Vermont Fish and Wildlife, and they operate like the State Troopers of Vermont. The Wardens employed are split up into four different districts: NorthWest, NorthEast, Central, and South, after that they are broken up into counties and towns. They are separated like this so that they have a more focused patrol area and the Wardens can get to know their area and therefore be more effective. I chose the Vermont State Game Wardens as my agency because that’s where I want to work in the future.

Don’t waste time
Get a verified writer to help you with The Vermont Fish and Vermont State Game Wardens
Hire writer
$35.80 for a 2-page paper

Writing this paper and doing all the research involved has been almost a kind of blessing because it has enabled me to know exactly what I need to do to be able to achieve my dream career. The same could be said for someone else in my shoes who wants to become a State Game Warden, however instead of doing all that research themselves all they have to do is read this paper.

Vermont Fish and Wildlife has a deep and enriching history that goes back over one hundred and fifty years. In 1866 the Vermont Legislature approved a Board of Fish Commissioners, and ten years later the Board was given authority over game birds and mammals. In 1892 the Board of Fish Commissioners was renamed the Fish and Game Commission, and these actions were the result of increasing public concern about fish, wildlife, and their habitats. Ever since the state of Vermont became settled, many species within it had declined in numbers due to unrestricted harvests, poorly enforced laws and habitat loss.

By the 1850s only 25 percent of Vermont was covered by forest because of extensive land clearing for farming. In today's world, almost 80 percent of the state is covered by forest, and many wildlife species have been restored. Even though the initial focus was on game fish, animals, and associated recreation, department personnel have always had a responsibility to all fish and wildlife species. This was formally recognized in 1983 when the department\'s name was changed from Fish and Game to Fish and Wildlife.
The Enforcement Division of Vermont Fish and Wildlife (The Game Wardens) provides the first line of response in the field and on the phone, to citizen requests for department services involving fish and wildlife problems, questions and enforcement. For example if someone called a Game Warden with concerns about a bear in the area the local Game Warden would respond and visit the caller to investigate what is going on and what is the best way to rectify the situation. Wardens enforce fish and wildlife, boat, snowmobile, ATV, and general criminal laws, which means that they have all the authority of a regular law enforcement officer along with environmental authorities. State Game Wardens also provide an important law enforcement support role during critical incidents and emergencies. Again, which means they can do anything a police officer can do as well as many other tasks. They also have an array of knowledge of Vermont's wilderness areas and utilize this knowledge along with special training to perform search and rescue operations if they are needed. The Vermont State Game Wardens can be reached by calling their home phone or the nearest State Police dispatcher, both of these contact points can be found on the Vermont Fish and Game Website.
The function of the State Game Warden is to prevent poaching, illegal trade, or the overuse of fish and wildlife resources. They also prevent and resolve human-wildlife conflicts, especially those involving dangerous, diseased or nuisance wildlife. They do their best to prevent the introduction of non-native, invasive species. They improve Vermonts citizens' awareness and understanding of the value of natural resources to encourage acquiescence with state laws and regulations, and kindle support and interest in various fish, wildlife, and habitat conservation and protection programs.
The Vermont Fish and Wildlife Law Enforcement Division is bureaucratic in nature, there is a chain of command, with regular Wardens, Supervisors, and Majors. At their core the Vermont State Game Wardens is a police force with other priorities.
Each wildlife habitat in Vermont has its own set of Wardens that are responsible for their own jurisdiction, although they might help other wardens in other districts. The districts in Vermont are separated into NorthWest, NorthEast, Central, and South. There are currently thirty seven Game Wardens employed throughout Vermont and its districts. The majority of them act as patrol officers due to the requirements of their job, and they are typically out and about keeping their eyes open. When they’re not in an office doing paperwork that is.
There is a great opportunity to rise up through the ranks, and the longer you work and are a part of the Wardens the more likely it is that you will advance. The different types of Game Wardens are simply labelled as 1, 2, 3, 4, 5 (Supervisor), 6 (Major) and each advancement comes with an increase in pay.
According to the State of Vermont Employee Services, (and as stated above) game wardens in the state are categorized as Game Wardens I, II, III, IV, V, and VI and earn the following salaries:

Along with the decent pay, Game Wardens have a slew of other benefits like paid vacation and sick leave, generous medical and dental insurance plans, office allowance, retirement plan, state-issued equipment including truck, snowmobile, all-terrain vehicles and a variety of boats, career advancement possibilities, and flexible hours. In fact, in speaking with a current Game Warden they have the ability to schedule their own hours throughout the day as long as they work a certain amount of them.
While out on patrol they look for general wildlife wrongdoing, people hunting or fishing to check their licenses, wildlife in distress, wildlife and human interaction, or they respond to callers. If they feel the time is right a Warden may even park by a field at night to try and catch poachers engaging in nefarious activities. If requested the Game Wardens will go out and teach schools or programs about fish and wildlife, or firearm safety. As an example, The Green Mountain Conservation Camp located at Buck Lake will have a Game warden come in once a week to go over firearm safety as a precursor to the Firearm shooting events.
To become a Vermont State Game Warden you must be a U.S. citizen, be between the age of 21-36, have a Highschool Diploma or Ged, you are also encouraged to have a Bachelor's degree in a related major, you have to meet certain physical and psychological standards, you must pass the Vermont State Police Academy Exam, have to make it through the actual academy, have two years prior experience in the military, as a police officer, or in a natural resources field, and finally you have to complete a three phase training course within the first year of employment.
Conclusion\n Because I eventually want to be a Vermont State Game Warden in life I have researched them before, but never in any such depth as this. So upon completing my new research I thought that the history of the department was extremely interesting. I had never thought about it before and to learn about the origin of the organization that I’m so invested in for the first time was really interesting. What surprised me about the organization was actually how much they get paid. When I thought about it it made sense considering all of their responsibilities but I just never expected that they’d be paid so highly along with all the benefits that they receive. I also really liked how they have the freedom to set their own schedules, that will make things like family emergencies and appointments easy to maneuver. As discussed prior I already had an interest in this department, but after researching I was surprised to find that the flames of my passion had been fanned even more. Any doubts that I previously had have been utterly dispelled and I’m certain that I want to become a Vermont State Game Warden. 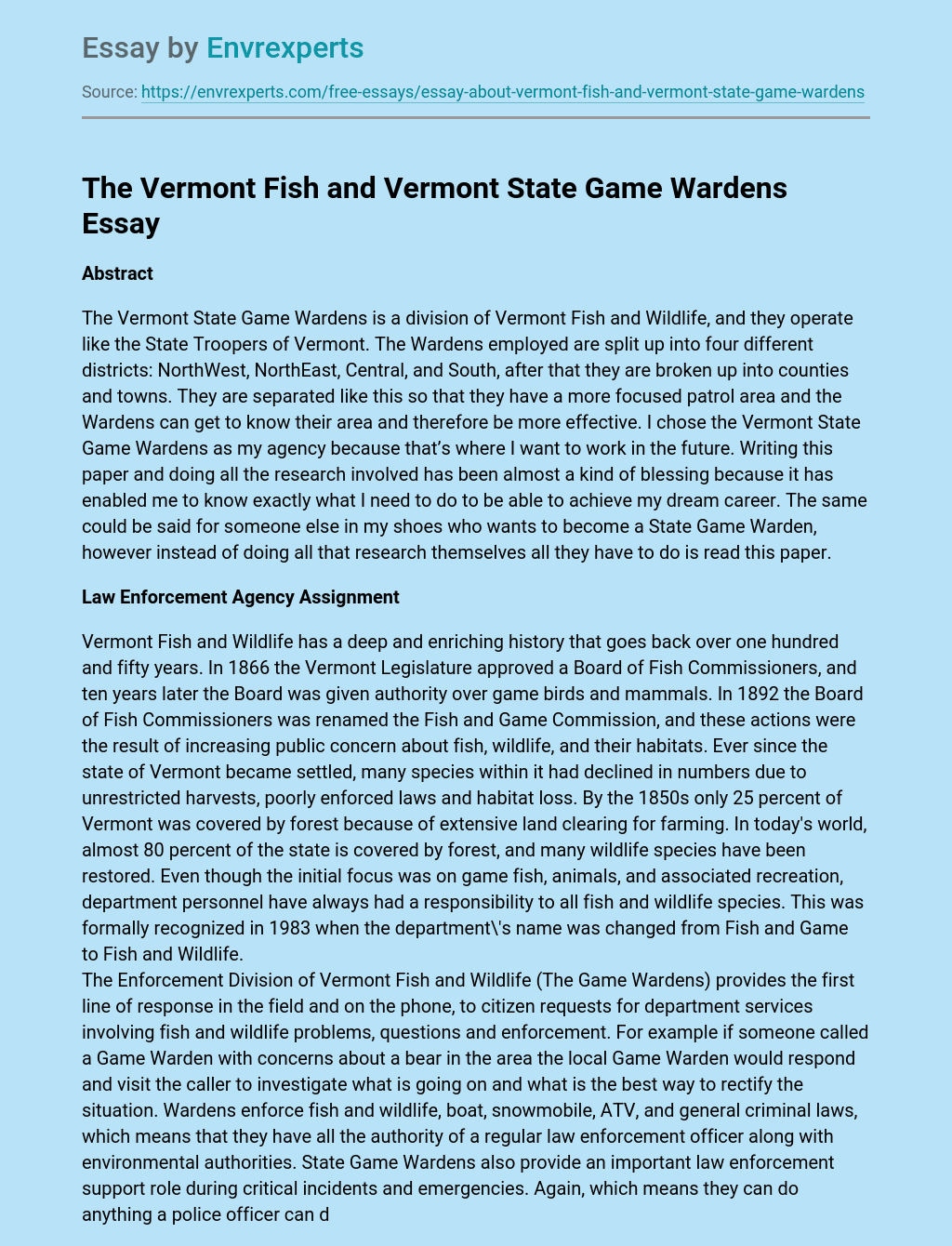