Volcanoes and It`s impact on Environment

Earth contains 3 main layers: crust, mantle and core. The crust consists of tectonic plates that sit above the upper mantle. Because of convection currents, also known as the driving forces of plates, plate movements can sometimes lead to disasters such as Mt Kilauea eruption. Hawaii is a hotspot located in the middle of the Pacific plate responsible for volcanic eruptions happening there, (Pacific plate movement and direction of Pacific boundary, 2019). Kilauea was caused by hundreds of earthquakes, which were a result of Pacific Plate shifting over Hawaiian hotspot and the impact could have been lessen by monitoring the volcano’s activity.

Don’t waste time
Get a verified writer to help you with Volcanoes and It`s impact on Environment
Hire writer
$35.80 for a 2-page paper

Kilauea is an active volcano that forms Hawaii, along with other 4 volcanoes. Mauna Loa, Mauna Kea, Hualalai and Kohala. Kilauea is the youngest but the most active out of the four volcanoes. This volcano is approximately 300,000 to 600,000 years old and is situated along Hawaii's south shore and is accepted to have regular sea level changes around 100,000 years prior to its eruption.

Kilauea is a Hawaiian word signifying 'much spreading' or 'regurgitating', named through the view of its glowing magma stream, (Britannica,2020). This report will talk about the causes of Kilauea’s eruption, the social, environmental, economic impacts and the role technologies play in reducing the negative impacts.

Volcanoes occur when magma ejects from well below the crust. They are created at plate boundaries called convergent boundaries. Volcanoes come out in subductions zones where there’s a collision of 2 plates, making the denser plate sink. This results in temperature and pressure change above the floating plate.

Low pressure above the floating plate causes rocks to melt in the mantle. Magma forms because of low pressure and high temperature and is thicker and lighter than rocks, but also follows the thermodynamic rule: hot air rises and cool air sinks. As magma is hot, it rises to the crust then rocks fall back to the mantle. When magma chamber pressure is higher than the crust’s strength, it bursts through the crust, resulting in a volcanic eruption, (owlcation, 2018). On April 30th, 2018, Kilauea's crater floor collapsed. Followed by hundreds of earthquakes, including one that had a magnitude of 6.9. Those earthquakes were caused by the shift of the Pacific Plate over the Hawaiian hotspot. Excessive heat from the Hawaiian hotspot melted the Pacific Plate above and seafloor spreading pushed the crust over along the Pacific plate boundary. The melting of Pacific Plate produces magma which rises through the mantle and crust, (Bagley, 2018). Action at Kilauea is driven by the light upwelling of a tuft of hot mantle, which gives the warmth to produce magma underneath the well of lava. This magma emitted from a few distinct areas, vents, on the well of volcano. Mt Kilauea also erupted because the rift zone got destroyed and magmatic pressure changes before the eruption.

In May 2018, Kilauea destroyed more than 700 homes and lava flowed 12.5 square miles from the volcano. 4 months later, Hawaii was buried under lava at a depth of 80 feet. Debris from Kilauea had devastating effects on air and water quality, also on the occupations of those living in this region. Volcanic ash crumpled rooftops, coated roads and made individuals suffer respiratory issues. Long-term effects of climate change will be unpreventable due to Kilauea eruption. The eruption sent hydrogen chloride and ash materials to the stratosphere for some weeks. Carbon dioxide from Kilauea caused chemical reactions producing chlorine monoxide which destroys the ozone layer. Pyroclastic flows of lava and sulphur dioxide killed many of Hawaii’s native wildlife. It is estimated that the volcano claimed the lives of 400 Hawaii residents. There were 24 injuries, 1 injured from hurdled molten rock and 23 tourists were injured on a boat while watching lava flow into the ocean. 2 people died from going into the volcano, (Gough,2018). Most damage was done to Leilani Estates in Hawaii, with a cost of over $US 17.6 million. Recovery of the eruption might cost $US 800 million, (Dayton,2018). Those impacts leaded to Hawaii residents dealing with economic loss as of tourism decrease due to activity at Mt Kilauea, maintaining the level of carbon dioxide and school closure, (Environmental impacts of Kilauea’s gas, 2020). The Hawaii authority stated that tourism dropped by 33% since 2017. Recreational spaces including parks at Hawaii were dangerous to visit as of Kilauea’s activeness and its poisonous gases that lead human and ecosystem health to jeopardy, (Bourlin, 2019).

Technology plays a crucial role in reducing volcano impacts. Volcano monitors lessen social impact by detecting magma flow and evacuating people as soon as volcanic activity becomes abnormal, such as the presence of smoke. Tectonic movement detectors help distinguish between the times when an evacuation is required. Moreover, having an evacuation plan and route can save people’s lives by not putting them at risk of coming across and getting caught in lava flows and preventing them from breathing deadly gases the volcano emits, for example sulphur dioxide. Technology can predict or tell ahead of time seismic activity and plate movements, helping people prepare for an evacuation. This decreases harm as well as financial misfortune and demise. With medical supply, injured casualties could be helped or made a difference. Development from volcanic site to a protected area is dependent upon innovation.

In conclusion, Mt Kilauea was caused by the shift of Pacific plate over Hawaiian hotspot, resulting in earthquakes. Activity in the mantle produces magma which then erupted from the well and vents of the volcano. Magmatic pressure at Kilauea’s summit caused the destruction of the rift zone, forcing magma through the surface. Kilauea eruption destroyed more than 700 homes and claimed around 400 lives of Hawaii residents. Lava injured 24 people, most of which are tourists watching lava flow into the ocean. Recovery of the damage might cost $US 800 million. Hawaii residents were impacted by lack of tourism and suffered huge economic loss after the eruption. Technology such as volcano monitors and tectonic movement detectors help reduce the negative impacts by evacuating residents, especially after an earthquake is felt.

Volcanoes and It`s impact on Environment. (2021, Oct 31). Retrieved from http://envrexperts.com/free-essays/essay-about-volcanoes-and-its-impact-environment 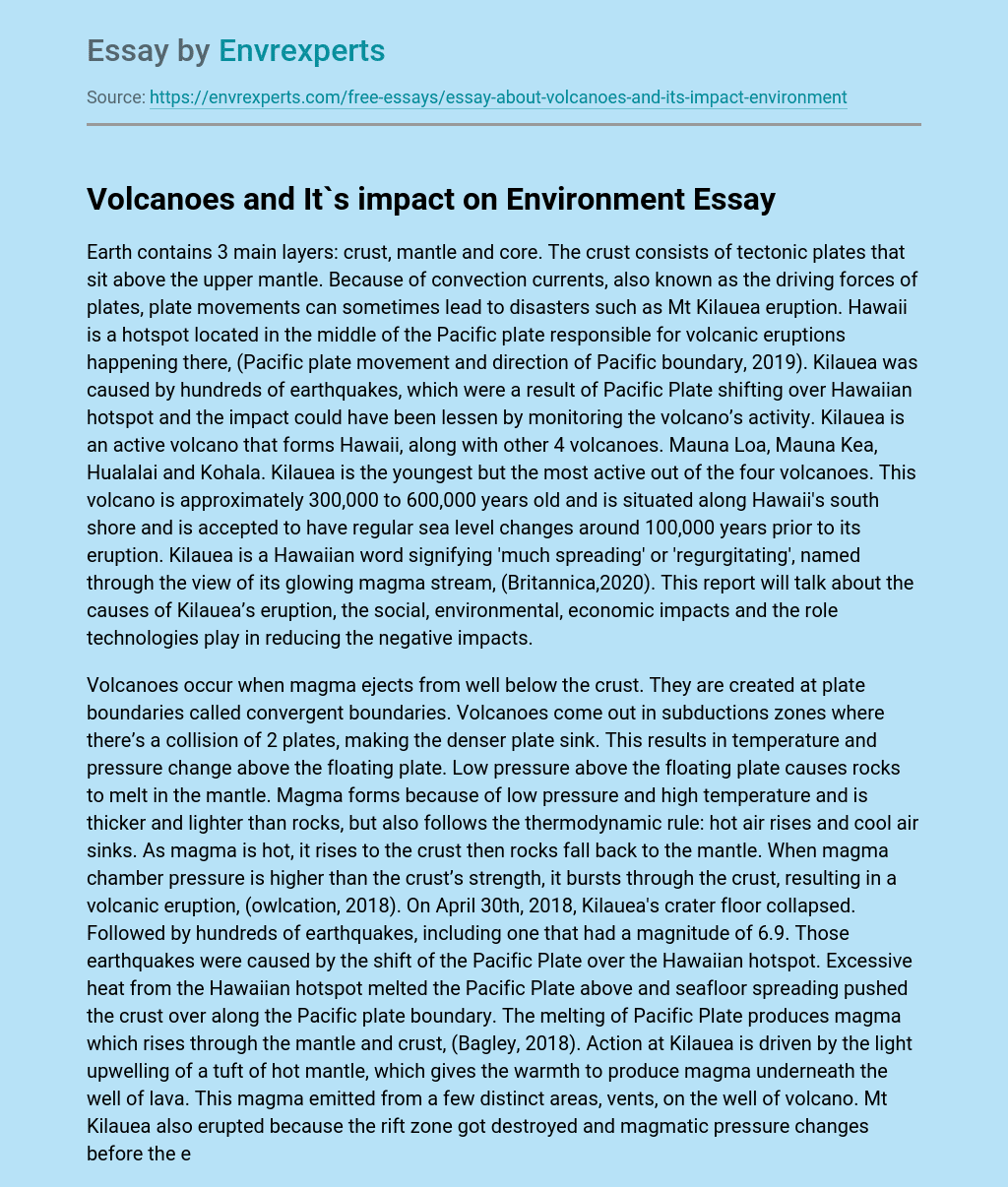