Waste Tyres as a Source of Energy

Students of the South African Research Chair Initiative (SARChI) Chair in Carbon Materials and Technology in the Institute of Applied Materials are developing novel materials and creative new uses for old materials in this field (Badenhorst H, 2014). Carbon black reclaimed from recycled scrap tyres is being employed in a variety of solar collectors, while graphite nanoparticles are being drawn on as additives in solar energy storage devices.
According to New growth Path Accord 4, Green Accord (2011), “In recycling, there are significant opportunities for the creation of small enterprises.

Don’t waste time
Get a verified writer to help you with Waste Tyres as a Source of Energy
Hire writer
$35.80 for a 2-page paper

Waste management provides another source of opportunity in extracting re-usable resources from industrial waste streams”.\nTo recycle the millions of scrap tyres in the country, the South African government recently implemented the Integrated Industry Waste Tyre Management Plan. This means that a large amount of low-quality carbon black will soon be produced. If this material can be utilised to capture solar energy, it will not only generate clean, renewable energy, but will solve a major waste problem at the same time.

Some of these initiatory steps entail the conversion of waste into valuable and profitable products. Waste to energy processes recover energy in the form of heat and fuel from waste sources. The aim of these initiatives, besides job creation and generating income, is to reduce the volumes of waste going to landfills. The technologies now exist to recreate how to create energy by converting waste into energy instead of environmentally damaging oil wells, fracking, tar sand mining and incineration, including tyres.

A huge amount of waste tires is generated every day and the extended process of production and application of scrap tires leads to their significant mass accumulation, thus representing environmental risk. Tires are inert materials, extremely difficult to treat, and non-biodegradable. A problem has emerged to find a suitable, environmentally friendly application of the products (gaseous, liquid, and solid) from pyrolysis of the tires. Pyrolysis oil, which is a liquid product, is not suitable for direct use as fuel because of its high sulfur content. Therefore, the desulfurization of pyrolytic tire oil is an important part of the oil production process prior to its use. Pyrolysis and gasification are some of the technologies which can be employed to achieve this objective.
Recycling of waste tyres has the potential to address both environmental and energy challenges as well as contributing to economic growth. The South African government recognizes the conversion of waste to energy in its plans and future strategies. Waste tires are collected and shredded down to about ¾ of an inch and de-wired. The tire chips are inserted into the pyrolysis system. Pyrolysis occurs when you heat tire chips in the absence of oxygen so there is no combustion. This allows the tire chips to be super-heated without them burning.

When tire chips are indirectly heated to 450 degrees Celsius, it break down the hydrocarbons to form synthesis gas (syngas) and solids (carbon). The carbon is micro-milled to a fine powder and pelletized to create tire derived carbon black or rCB to replace crude oil derived carbon black for pigmentation and lower grade rubber products. The syngas is condensed into a Pyroil, which is then upgraded to a D975 ultra-low sulfur diesel. Any syngas that is not condensed into Pyroil, is recirculated back into the burners so the gas produced by the pyrolysis system is used almost 100 percent so there is very little waste. The benefits are reducing waste tires into landfills, improving the environment and creating cleaner fuels than traditional oil wells and mining. Any time when waste is convert it into a cleaner useful product instead of burying it in a landfill, that’s a huge benefit to society and the environment.

Instead of having a toxic waste product like tires leaching into the soil, manifesting infestations of mosquitoes from the water it captures or reducing potential for catastrophic fires and pollution created by waste tires, that’s a huge benefit to society and the environment. Tire waste to energy creates a cleaner version of fuel, energy or carbon than the crude oil alternative. It’s the purest form of recycling. These reflected in the concept of guardable bottom line, where environment, profit, culture are positively addressed.\nEnergy security, economic and environmental issues have sparked an interest in the pyrolysis of scarp tyres to production of petroleum products and energy in South Africa. Though the application of the process on a commercial scale is being disadvantaged by the high cost required to upgrade the comparatively low quality pyrolysis products as well as the high energy input.

According Riki Strydom (2017) “Waste tyres pose an extreme fire risk which is especially difficult and time consuming to extinguish. Untreated landfill tyre fires have been known to smoulder for years. An additional problem with tyre fires is the harmful emissions released to the atmosphere, soil and water (Lung 2009). In some environments the storage of waste tyres provides ideal breeding ground for insects and various bacteria (Kalverkamp and Pehlken 2016). To prevent fire risk and infestations, waste tyres are shredded and buried (Karmacharya, Gupta, Tyagi et al. 2016). Even then a two-fold problem arises. The process is very energy intensive and the tyres potentially valuable energy is lost.

Therefore, around the world, countries are trying to curb discarding ELTs in landfills, however it still remains the prevalent method of disposal (Martínez, Puy, Murillo et al. 2013). In the European Union, tyres are banned from landfills while the United States have restrictions requiring tyres be shredded or monofilled (WBCSD 2010). Hence there is a pressing need to develop commercially viable and environmental safe technologies to combat the vast and growing amount of waste tyres being currently stockpiled in a number of landfills across the world. The lack of any environmental or economically feasible solutions to deal with the waste tyre disposal poses a serious dilemma. A cost effective, environmentally sound and sustainable management of scrap tyres has remained a daunting task (Kannan, Diabat and Shankar 2014, Williams 2013).

A steady decline in world fossil fuel reserves has sparked interest in alternate energy sources. A growing need for new sustainable energy solutions has led to the growing investigation thereof. Ironically, end users of fossil transportation fuels are the increasing number of motor vehicles worldwide which in turn elevates the waste tyre problem. Due to tyres its high energy content, waste tyres landfills are seen as stockpiles of potentially valuable energy resources that can be converted to fuels, chemicals among others (Choi, Oh and Kim 2016). A dual solution will be achieved by utilizing the vast and growing stockpile of waste tyres currently to meet the growing global energy demand. It will serve as an alternate energy source and as well as a sustainable and environmentally friendly waste tyres disposal means. It is known that rubber has a gross calorific value higher than that of coal (Rathsack, Riedewald and Sousa-Gallagher 2015) leading to an investigation into converting the waste tyres to a viable energy source. Therefore, the growing commitment to and investment in the development of innovative technologies for waste tyres recycling and processing in South is provoked by environmental as well as economic factors. The unsustainability and the public health concern of the present landfilling disposal method and the country dependency on imported crude to meet the growing demands for transportation fuels and energy has led to the growing investment in the development of commercial processes for the conversion of scrap tyres to fuels and energy in South Africa.”

These tyre to energy recycling through pyrolysis is been implemented in both developing and developed countries. In USA waste tires to fuels project has keep more than 1.6 million waste tires out of landfills the first year with that number doubling to 3.2 million waste tires per year. The project is utilizing proven pyrolysis technology that has more than 20 systems deployed over the last 10 years. Singh N (2014) have reported that the tyre waste generated in India is nearly 3.2 million tons by 2014. Therefore, the probable fuel oil generated from this tyre waste by using pyrolysis plant will be approx. 1.44 million tons. The LDO and furnace oil are being used as fuel for agricultural pump sets, industrial units, startup fuel for power generation, etc. These can be substituted with the fuel oil generated from pyrolysis process of waste tyres. The present demand (tentative consumption) of LDO and furnace oil in Indian industries is 6.46 million tons. This demand couldbe met out up to 22.29% (1.44 million tons) with the supply of fuel oil, presumed to be generated by pyrolysis of 3.2 million tons of tyre waste.
The recycling of tyres into energy source as in Fuel oil will assist to achieve the SDG goal 1 and17, for poverty elevation and clean energy source.

Waste Tyres as a Source of Energy. (2021, Oct 31). Retrieved from http://envrexperts.com/free-essays/essay-about-waste-tyres-source-energy 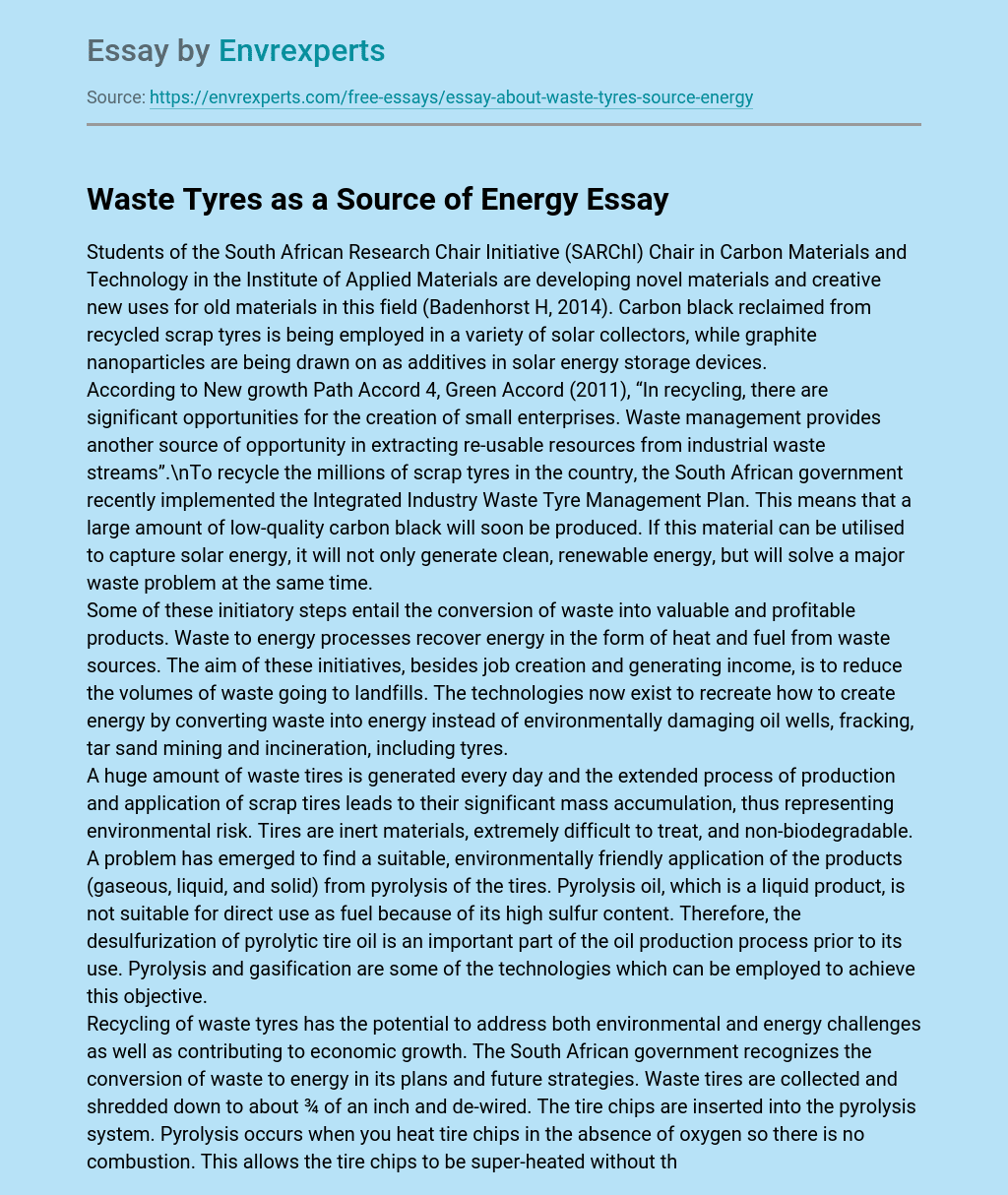