Camas County, Idaho is situated in a semiarid plain that is encircled by mountains with limited access to water. With an average precipitation of 15.7 inches that is mostly due to the contribution of snow fall, it has become imperative for the agricultural community to understand how to manage under these strenuous conditions. To that end the region of Camas County has been implementing water conservation as far back as 1957. In the month of August 1957, The Camas County Soil Conservation District was established with the understanding that the need for long term sustainable agriculture was critical given the limited resources the farmers are utilizing.

Don’t waste time
Get a verified writer to help you with Water Conservation of Camas County
Hire writer
$35.80 for a 2-page paper

Collecting information regarding the climate is crucial in regulating water usage for the Camas County region. Temperature, precipitation, humidity and crop evapotranspiration (ET) data is utilized to best determine efficient use of water. ET is the sum of evaporation (water lost outside of the plant) and transpiration (water lost through the plant itself). The primary water sources are the Magic Reservoir, the Snake River and Camas Creek as well as ground water aquifers that supply the bulk of agricultural needs.

According to the University of Idaho “Camas County has a semiarid climate with a mean annual precipitation ranging from 15.7 inches on the central valley floor to more than 25 inches on the higher mountains. Precipitation is mainly in the form of snow.” ('Agriculture', n.d.). The ground water is being recharged by runoff from nearby mountain streams and precipitation. Being a semi-arid region, water evaporates quickly off the plains.

This becomes problematic for years that consist of temperatures that exceed higher than normal forcing less rainfall from being absorbed.

Being situated as part of the Snake River plain (one of the most productive irrigated agricultural regions in the western United States) Camas County relies heavily on irrigation for agricultural needs. Without vital irrigation water, farmers and ranchers would be unable to provide the crop and livestock resources essential for the economy of Idaho. In addition, the high desert of southern Idaho would revert back to the rangeland it was prior to irrigation development in the early 1900’s. To that end data collected on water supplies and temperature are put into effect to regulate the scheduling of irrigation water based on the crops water requirements, which is measured by monitoring the crops soil moisture.

“Camas Prairie is an eastward-trending intermontane basin along the north flank of the Snake River Plain in southern Idaho. The basin is about 40 miles long and averages about 8 miles wide. It was formed as a structural depression in which a considerable thickness of alluvial and lake deposits accumulated behind basalt flows, which at times blocked the outlet to the east. Intrusive and extrusive rocks of Cretaceous to Quaternary age enclose the basin on the north, west, and east. The enclosing rocks yield small amounts of water to springs and wells from the weathered mantle and fractures.” (WALTON, n.d.). Recharge to the basin is from direct precipitation and percolation of stream runoff from the bordering mountains. Ground water moves from the higher areas at the base of the encircling mountains toward the center of the basin and the eastern outlet. The Camas County Soil Conservation District monitors these levels on a frequent basis understanding the need that would arise if water levels became low it would affect not only agricultural usage but also effect the residential wells that the community relies on.

Water contaminants that were flowing into Camas Creek became a concern in 1979. A survey was conducted of the water quality of Camas Creek which was feeding into the Magic Reservoir. “During the study, the major stream water quality problems were found to be trophic concentrations of nutrients. Some sporadic bacteria violations were also noted, but turbidity and suspended sediment levels were not high enough for concern. Phosphorus concentrations as high as twice the algal bloom potential was observed on several intermittent tributaries and on Camas Creek. Generally during non-runoff periods, inorganic nitrogen concentrations were greatly above trophic levels on some of the tributaries and near the mouth of Camas Creek. Field observations indicate that the major pollution sources in the Camas Creek drainage are agricultural nonpoint sources.” ('Science Inventory | US EPA', n.d.-c). As a result, “In June of 1994, the District completed the Camas Creek Agricultural Pollution Abatement Plan funded under Idaho’s State Agricultural Water Quality Program (SAWQP), the predecessor of the state’s current Water Quality Program for Agriculture (WQPA).” ('CAMAS CREEK', n.d.-b). As of 2005-2006 over 96 miles of Camas Creek and its tributaries were assessed during the 2005 and 2006 season by teams assembled from personnel of the Idaho Association of Soil Conservation Districts, the Idaho Soil Conservation Commission, and the Natural Resources Conservation Service. The teams evaluated direct and indirect impacts to the streams and influenced areas. The data from these evaluations were used to develop realistic goals for TMDL (total maximum daily load) watershed improvement and the designation of critical areas and treatment units.

In conclusion with the development of The Camas County Soil Conservation District, Camas County has been making increased changes to their approach to conservation. This is done by monitoring the climate and regulation water usage accordingly, evaluating underground water levels and their replenishment and creating methods for reducing water contamination. This is done with the understanding that in the development of greater water conservation methods, their way of life will be sustained allowing a productive agricultural future for years to come. 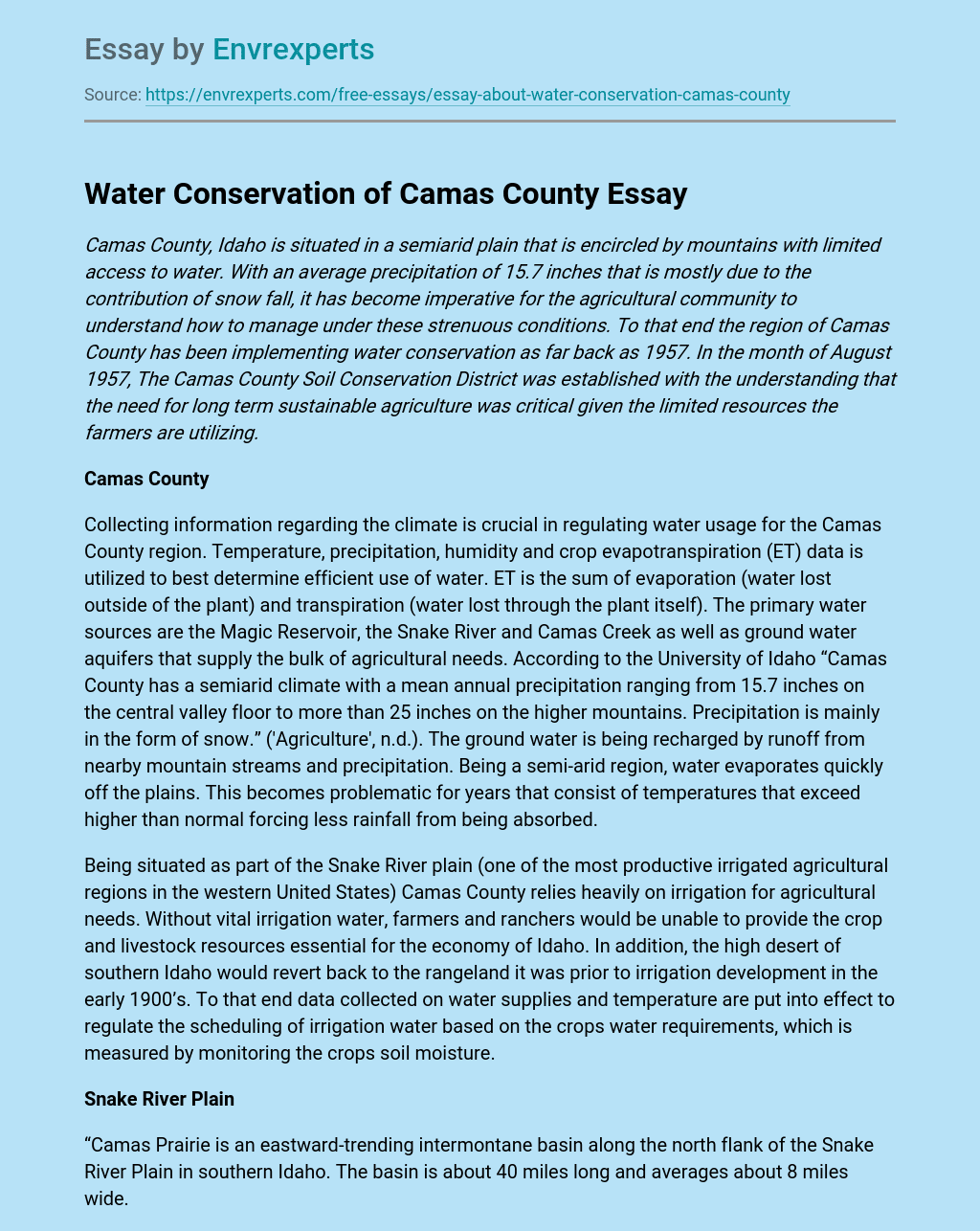