Water is one of the most important substances on earth. All plants and animals must have water to survive but nowadays the quality of natural decreases due to urbanization, industrialization and agricultural those causes of water pollution(Singh and Gupta, 2017). But in recent years there efforts and strategies that controls the environmental impacts in developing countries such as resource depletion, climate shifts, population pressure and increased public awareness. Even though efforts of environmental management have been done but the water quality deteriorating are everywhere in the world(M-geo, 2012).

Don’t waste time
Get a verified writer to help you with Water Quality and Pollution of Kulfo River
Hire writer
$35.80 for a 2-page paper

According to the UNICEF & WHO, 2019 2.6 billion People, more than 40% of the world population, do not use a toilet, but defecate in the open or in unsanitary places. That causes unsafe water, coupled with a lack of basic sanitation, kills at least 1.6 million children under the age of five years.
To survive the life of human and aquatic animals the water quality is become important component and new skills required to effectively plan, implement and management of water quality activities in developing countries(UNEP, 2011).

Pollution of the river originates from both natural and human activities that have great impact and deteriorate water quality. Nowadays deterioration in river water quality is a prominent issue throughout the world and probably a serious damage to the nations(Zaideen, Suratman and Tahir, 2017).These contaminants may lead the humans, animals and plants to hazardous risks and also affect economic development and social prosperity(Sharma and Bhattacharya, 2017).
The spatial and temporal variations in hydrochemistry of rivers, regular monitoring programs are required for reliable estimates of the water quality.

This results in a huge and complex data matrix comprised of a large number of physico-chemical parameters(Singh et al., 2004). In recent years, multivariate analysis such as Principal Component Analysis (PCA), Cluster Analysis (CA) has been widely used spatiotemporal variation of water-quality data analysis in order to drawing meaningful way and usefully information(Kaveh et al., 2015).
In last several decades in Ethiopia there are numerous efforts have been increasing to understand the importance of the drinking water quality to prevent the public health and raw water quality to aquatic life(CSA, MOWIE, World Bank, UNICEF, 2017).
In order to prevent the pollution in kulfo river its required effective monitoring and management to protect the human health and aquatic life in estuary at the end of the river, thus in this study is to analyze and investigate the phesico-chemical parameters in spatial and temporal variation of kulfo river water quality.

1.2 Statement of the problem

Since the rivers are surface water bodies that are mainly inland. They are characterized as the most exposed to pollution of contamination due to the industrial, agricultural and domestic affects. kulfo River is one of the rivers that located in Arbaminch that mostly uses for domestic and irrigation purposes.
The major degradation of the river water quality occurs either by the natural process such as rainfall, erosion and sediment loading or by the anthropogenic including the industrialization, urbanization and agricultural impacts. Due to increase in population, urbanization and agricultural activities the water quality of the river Face to a poor environmental awareness. So all this discharges from point and non-point source pollutants will affect the color, odor and the quality of water that may cause human health. the Contaminants of kulfo river they are different from place to place due to the activities of human and also from season to season due to the sediments of rainfall. So in this study we evaluate the spatio-temporal variation of river water quality.

1.3.1 General objectives
The general objective of this study is to evaluate the spatiotemporal variation of kulfo river water quality by using multivariate statistical techniques.
1.2.2 Specific objectives

The scope of study of this research is at Kulfo River which is located close to the Arbamicnh town. The purpose of this study is to identify the spatiotemporal variation of Kulfo River water quality by using multivariate statistical analysis including the factor analysis, principal component analysis and cluster analysis. The analysis of river water quality based on the phesico-chemical parameters will involve 12 parameters which are PH, electrical conductivity (EC), total solids (TS), total dissolved solids (TDS), dissolved oxygen (DO), total alkalinity, total hardness, calcium, magnesium, sodium, chloride and nitrite. All parameters will be evaluated based on in-situ test and laboratory test. The samples will be collecting 15km of the River with in two different seasons that are winter and summer seasons.

There are many different types of pollutants that in enter to water body from point source and non-point source including sediment, nutrients, heavy metals and radioactive source from industrial wastes. So the important of water quality modeling is to predict, simulate and the final fate and behavior of pollutants in water environment (Sumita and Kaur, 2017).

Surface Water is a term used to describe water on the earth’s surface naturally including liquid (rivers, temporary streams, lakes, reservoirs, bogs) or solid(glaciers, snow cover) that mostly come from the precipitation of rainfall. The major participant of surface water is hydrologic cycle that involves circulation of water on the earth and surface water bodies feed the runoff from the precipitation(Khublaryan and Sketch, 2003). The people use surface water for different purposes including personal hygiene, drinking, bathing and irrigation in order to manage their basic necessity of life(Cosgrove and Rijsberman, 2018).
The purity of surface water is polluted when the contaminants and activities human deteriorate the water quality. The main participants of water quality are due the increase of urbanization, economic development and agricultural activities that causes contaminates that affect human health and aquatic life Even though the pollution is not always visible but they affect human health and aquatic life that life in water bodies due their dangerous contaminates or toxic substances and disease-causing bacteria and organism(Kong et al., 2018).

2.3 Dynamic system of the river

Rivers participate economic, social and political developments of the countries and also to deliver fresh water distribution for the consumers. But water of river not only used drinking water but he have multiple purposes including disposing of wastes from municipal and from industries, irrigation of agricultural, navigation and fishing(Friedrich and Thomas, 1996). The river transports the sediments and turbidity from the upstream into a large water bodies including lakes, deltas and costal shores that mostly occurs in downstream. The river water drains from deferent source that is called headwater water and they gathered or collects into the main rives flow(Czernuszenko, no date).

The pollution is especially serious in the urban settlements that from different source of contamination including development of urbanization, industrialization and negative consequences are arising on the natural resources and the environment that my discharge the river water into direct or indirect ways and the contaminants can be classified in three categories and they are physical pollution, chemical pollution and biological pollution(Dimitrovska et al., 2012).

2.4.1 Types of pollution in the river

According to Viman, Oroian, & Fleşeriu, 2010 the types of river water pollution are: point source and non point source
Point source pollution: Is the toxic chemical contamination discharged into the rivers that have special permission or accidental and mostly come to waterways from the industrials. Such discharge toxic the effect drinking water and aquatic life into the river due to depletion of oxygen.
Non-point source pollution: It’s also called natural pollution and is much big problem and great effect then the artificial pollution. It occurs when rainfall, snowfall, or irrigation runs over land or through the river and picks up pollutants and deposits them in bodies of water. Agriculture often has great effect on the river water quality includes their chemical fertilizers.\n\n\n\n\n3 Materials and methods

The study area, Kulfo River watershed, is located in the Abaya-Chamo sub-basin of the southern Ethiopian Rift Valley and drains to Lake Chamo. The watershed is situated between 5°58’ N – 6°18’N latitude and 37°18’E – 37°38’E longitude; latitude and has a land area of 395 km2 where 85 % of the watershed is gauged before it joins Lake Chamo. Smallholder agriculture is the dominant land use in the watershed. Kulfo River is a tributary of the Lake Chamo system, draining the western Garbsen shoulder and meeting Lake Abaya-Lake Chamo just in the transition zone(A.M. Seka and A.K. Mohammed, 2016).

Climate is the factor that in a natural way determines the schedule of recharging groundwater resource. It causes direct influence on infiltration, groundwater storage and over flow that brings to the springs on the surface of earth. The metrological data include rainfall and temperature in the Arba Minch, zigit and Chencha that represent upper zone of catchment are used to identify the climatic schedules of study area(Azagegn, 2018).

According to the (Gissila et al., 2004)In Ethiopia there are three rainy seasons and they are 1. February/March to May 2. June/July to September 3. October to November. But these seasons are not common in Ethiopia. The annual rainfall distribution in the western part of the country has one rainfall maximum during July or August. Based on contribution of rainfall pattern, the watershed of Kulfo River delineated into; Arbaminch, Zigiti and Chencha which belongs to lower, intermediate and upper zone of river basin respectively. But in upper zone the in wet season is start first rain time from March to May with Max. Rainfall reaches 191.1mm and second rainy time from July to October with Max. Rainfall reaches 162.2 mm. in this region all months in have been taken as dry seasons.
In the lower and intermediate part, wet and dry season schedule is approximately the same; first rainy time from April to May with Max. Rainfall reaches 157.67mm, 182.3 mm and second from September–October with Max. Rainfall reaches 98mm, 110.85 mm respectively. But the other all months has been taken as dry months.

2.3 Methods of data collection and analysis

The sample will be collecting in four months starting from the last of March and ends with last of July that consist the wet and dry respectively in Arbaminch rainfall. These seasons including the winter and summer that the Kulfo River water quality is mostly under the influence of anthropogenic and natural changes. The sample is taking at 2 times at each month by the 8 different places on the river at 12km at interval of 1.5km between two sample paces.
The water samples were collecting at the river at about 0.2 m below the water surface by using clean Van dorn sampler and stored in polyethylene bottles by following the standard procedure for the collection of water samples. After one hour of data collection the samples will be transporting to the laboratory to analysis it.

The data analyzing by using Multivariate statistical analysis including factor analysis to find the main pollutant sources causing differences between the stations. After identification of the major hidden pollutant sources in the selecting part of the river, the next step was to examine the similarity among considered stations for possible zonations according to the level of existing pollution. For this purpose, the cluster analysis was used to decide which of the sites are most similar to each other, considering all of the pollution properties simultaneously. 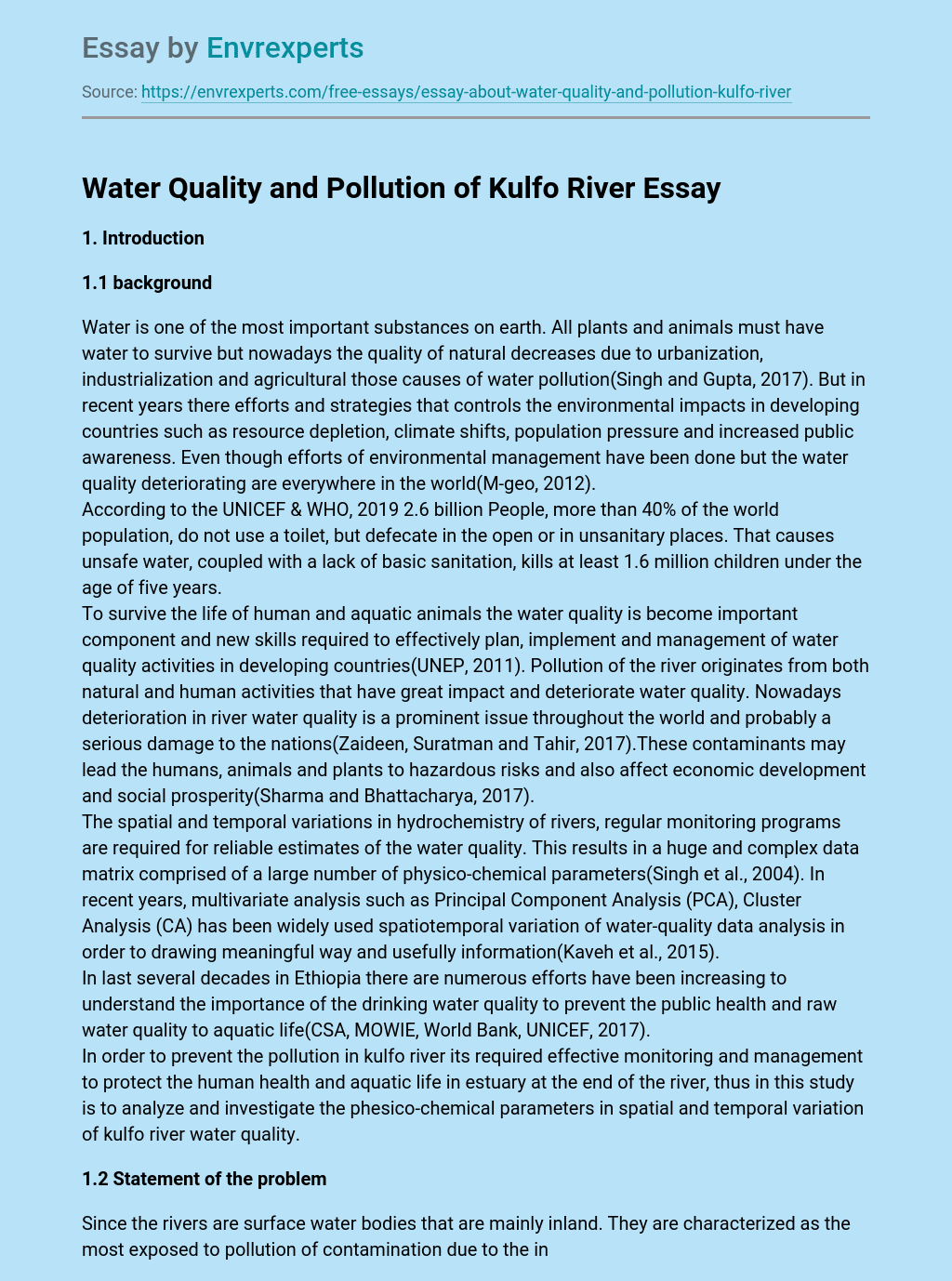