Pakistan is the second largest country in South Asia and mainly comprises dry or cold areas with low production potential. Geography varies across the country, shaping the great variation in the country’s climate. Climate ranges from mild winters and hot, dry summers in the north to semi-arid and arid zones in the west and the south. The country is bounded by the Himalayas in the north, the mountain ranges of Sulaiman in the east, and the low land plains of the River Indus in the south, west, and coastal areas.

Don’t waste time
Get a verified writer to help you with Water Scarcity and Food Insecurity in Pakistan
Hire writer
$35.80 for a 2-page paper

Sixty percent (60%) of the total watershed area of the Indus basin lies within Pakistan’s territory.
Climate change exposes these areas to risks of glacial retreat, sea level rise, temperature increase, more frequent floods and droughts. As more than half of its land area is arid and semi-arid, expected changes in temperature and rainfall patterns in the future could impinge upon its food security and the welfare of millions of its people.

The preliminary studies carried out indicate that Pakistan’s 22.8 percent area and 49.6 percent population is at risk due to the impact of climate change.
Pakistan is more susceptible to the effects of changing climate because of its agrarian base and high dependency on natural resources for livelihoods. As agriculture is the lifeline of our economy, the influence of changing temperatures is expected to be most lethal in this sector. Pakistan\'s Food Security has been put at risk and a reduction in annual crop yields brought on by various factors including increased water logging, desertification of land, growing frequency of pest attacks and disasters has been observed.

According to projections, with just a 1°C rise in temperature, wheat yield in Pakistan is estimated to decline by 6-9% and an even lesser rise in temperature will severely impact cash crops like mango and cotton.
The effect on agriculture is linked with the impact of climate change on water availability as Pakistan relies on irrigation for more than 90% of its agricultural production. Considering that only 40% of water diverted from rivers actually reaches the crop, affecting irrigation efficiency as a result of water shortage. Projections for future water availability scenario are mixed; on one hand reports by the Intergovernmental Panel on Climate Change (IPCC) suggest that Pakistan will receive higher levels of rainfall with the increasing temperatures, meaning that we will get more water. However, storms and floods resulting from the increase in precipitation coupled with the irregularity of water distribution will most probably offset the benefits of receiving more rainfall.
Pakistan receives around 80% of water in the Indus Basin System from the melting of glaciers and snow melting. The system is in dynamic equilibrium with the annual availability of water in the Indus River system. The rise in temperature would, thus, interact with the availability of flows. More water is likely to be available in the earlier periods and less in the later stage in view of reduction in volume of glaciers and less snowfall. This is likely to dispel disasters in the long-term availability of water in the Indus Basin System. It has been accepted by the today’s world, that climate is really changed and still changing with emission of GHG’s from various sectors. It is proved that increase in global average temperature rise is 0.6C0 in the recent past century and it is expected to be increased by 1.4C0 to 5.8 C0 at the end of the recent century (IPCC). Main contribution to the fast changing conventions of climate is because of increased anthropogenic activities; like fuel burning and cutting of forests for agricultural land use. With passage of time as a result of this increasing nature of temperature and climate change will give rise to other significant issues regarding environment, social and in political arenas (LEAD, 2008). It is necessary to make it clear here, GHG’s levels are significant as the GHG’s cannot be defame, but the level of GHG’s is very important; because, these are GHG’s which keep the earth temperature suitable for living organisms necessities. As, the mean temperature of the earth globe is 15C because of GHG’s, if there is no GHG’s than the temperature will fall to -18C0. But unfortunately the level of GHG’s is increasing day by day and climate is changing parallel to increase in temperature globally. The climate change problem cannot be solved through the concept of “One size fit all” approach. Every nation should understand its local context, how to take mitigation/ adaptation measures (IPCC).
The scenario of Pakistan government Task Force on Climate Change is; “adaptation is the main and key factor for the future generation”. Contribution of Pakistan to budget of GHG’s can be best understood from the given data as; total emission of GHG’s in the year 2008 is 309mt (million tons) of CO2 equivalent. Range of domains adding GHG’s; energy sector (50%), agriculture sector (39%), industrial (6%) and others (5%). In the world ranking of GHG’s emission per capita Pakistan is on number 135th (Planning Commission, 2010). Keeping in focus water, food, energy security and livelihood of people, Pakistan is highly vulnerable country to Climate Change.

In Pakistan like in the overall globe; water, food and energy have a balance interdependent connection, which is disturbed by the globally climate change. Hot climate, changing pattern of snow melt and rains influences negatively social and economic stress on natural resources, which in turn producing pressure on the river flows, their plains, delta and sea, upon which the poor communities depend for their livelihood. Due to the lake of environmental flow in the deltaic system about 2.26 million people facing water scarcity, rising sea level and food insecurity. And the areas near flood plains of the river are insecure because of out bursting of glacier, this is one of the big climate change threat to Pakistan presently. Next biggest threat is the promotion of Pakistan from water stressed to water scarce nation because of anthropogenic activities, leading to food and energy insecurity too. There is no clear policy of Pakistan government about public awareness, mitigation measures and adaptation which make the country more prone to climate change impacts. Fresh water resources are descended much more as in 1951 there were the availability of 5650 meters/per person/year now receded to 1100 cubic meter/per person/year till 2010 (World Bank, 2006). According to the same report it is going to be decreased to 800 cubic meters/per person/year up to 2026 (World Bank, 2006). Because of these situation not only food and energy insecurity is going to increased it also enhancing political tension by leaps and bounds. The World Bank report 2006, also states that Pakistan’s water economy: Is Running Dry, the western Himalayan glaciers is going to retreat for the next 50 years, will increased water flow for some time, but after that; the water level will fall up to 30 to 40% in the Indus river system (UNEP). Livelihood of people is also connected directly to both the quality and quantity of water, because of which many health problem occur, especially to those who are directly subjected to the vulnerable condition or impact of climate change, including destitute on the top.
How water scarcity and food insecurity are interlinked? Some values can better explain this; as agriculture resources using 90-95% of fresh water, which in turn contributing 22% to the GDP, and employ 43% labor of Pakistan, shows that 68% livelihood dependent on this sector. According to the report of (UNWFP) 60-77 million people of Pakistan are the residents of rural areas, which facing food insecurity issues. Half of Pakistanis are suffering from food insecurity problems (Action Aid, 2008). Wheat production is going to be increased in the mountainous region and decreasing in the sub mountainous and arid regions because of increase in average temperature from 1-5C0 (GCSIC, 2009). It is of special consideration because 90% of wheat is grown in arid and semi arid regions of Pakistan. Other main economy dependent crops like rice and cotton are also in stake, as both of these crops require more percentage of water to grow; 1kg of rice in Pakistan require 5.10 cubic meter of net water while cotton require 10.45 cubic meter of water (Agriculture statistics of Pakistan, 2002-03). Livestock sector of Pakistan is also highly vulnerable to climate change (Planning Commission, 2010). Similarly the electricity demand will rise to 162000 MW up to 2030, currently (2005) there is a short of 3000 to 5000 MW (Planning Commission, 2010).
From all the discussion and analysis included here we can conclude that water, food and energy are interlinked and have a complexity of interdependence up on each other shows that there is no simple solution to the climate change impacts. While the best approach toward dealing CC impact is the strategy to combine multiple elements including technical advancement and social consideration to give response to these endangers situation of the present and upcoming nation. To mitigate the Climate Change impacts we need collaborative approaches of all sectors and departments of all levels. \nSome important recommendations: 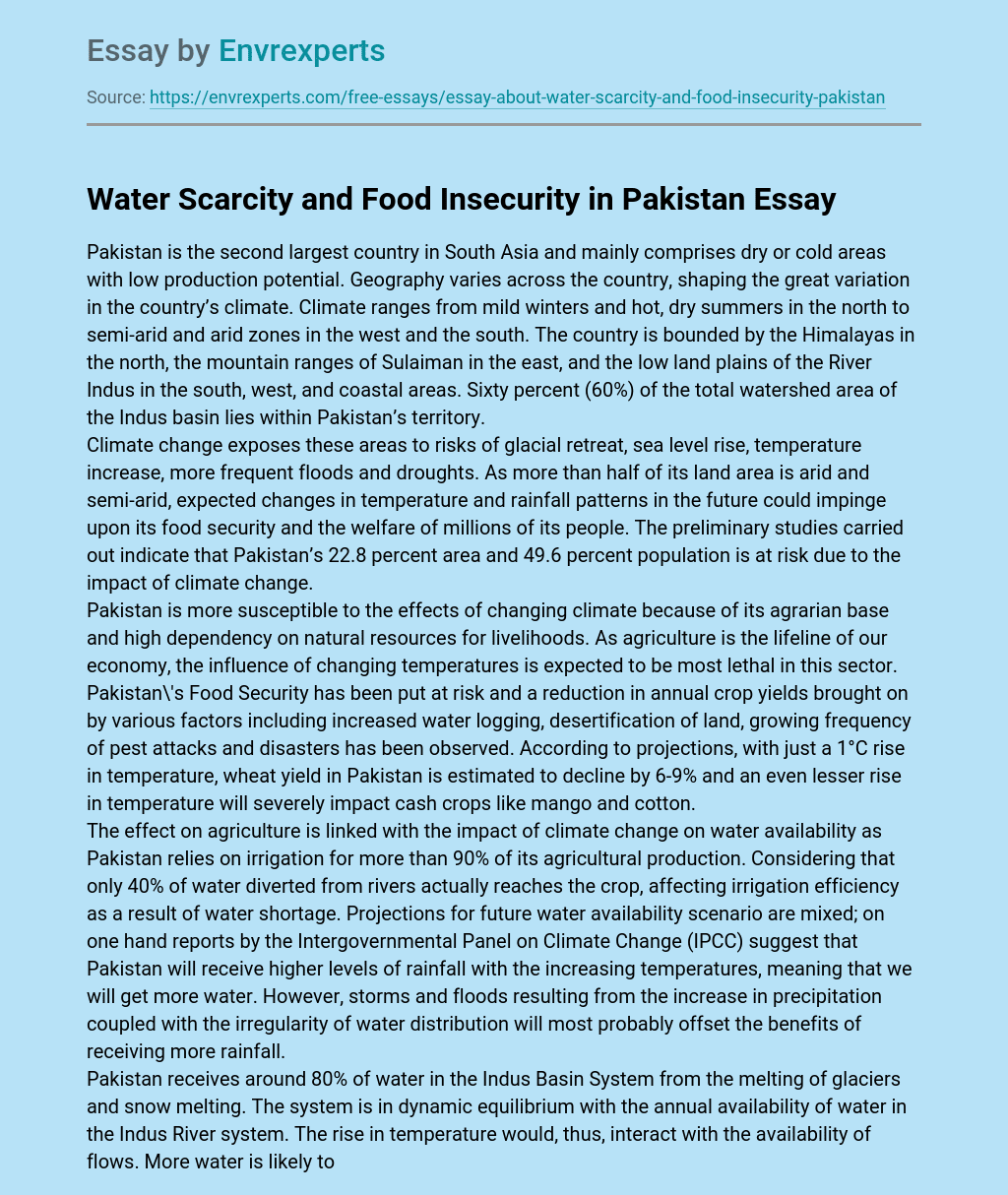