Water is a critical resource for the livelihood of individuals and the sustained development of any economy. Pakistan is one of the most arid nations on the planet, close to 92 per cent of the land classified as semi-arid to arid. It’s major sources of water are low precipitation (an average of under 240 mm a year with large seasonal and regional variations), lakes and rivers, and groundwater. The population and the economy are heavily reliant on an annual inflow into the Indus river system, comprising of the Indus, Chenab, Jhelum, Ravi, Beas and Sutlej rivers, mostly emanating from the Hindu Kush-Karakorum-Himalayan glaciers and Pakistan’s neighbouring country, India.

Don’t waste time
Get a verified writer to help you with Water Scarcity in Pakistan
Hire writer
$35.80 for a 2-page paper

The world’s fourth-highest rate of water usage is that of Pakistan. It’s water intensity rate, that being the per unit Gross Domestic Product (GDP) The agriculture sector, which is considered to be the foundation of Pakistan’s economy, contributes almost 25 per cent of the GDP, with approximately half the labour force employed in this sector.

It is the main consumer of water, about 90 per cent of the country's agricultural production comes from land which is irrigated by the Indus basin irrigation system and will continue to dominate the water demand. Similarly, for industrial development 29 per cent of energy is produced through hydropower, which is generated by way of water stored in dams and reservoirs. From these statements, alongside domestic use per person in a rising population, we can conclude that the significance of water for the survival of the South Asian country’s economy is undeniable.

Despite such a massive dependency on water, the country is facing an extreme water crisis. In 2016, the Pakistan Council of Research in Water Resources (PCRWR) stated that in the year 1990 Pakistan touched the 'water stress line' and in 2005 it moved past the 'water scarcity line'. Further reports by the United Nations Development Programme (UNDP) and the PCRWR warn the authorities that Pakistan will reach absolute water scarcity by 2025. Moreover, the International Monetary Fund (IMF) ranked Pakistan third in the world among countries facing acute water shortage.

In addition to limited supply, the current water resources in Pakistan are quite unpredictable in nature. Pakistan relies heavily on the Indus River and its tributaries (Kabul, Jhelum, Chenab, Ravi, and Sutlej) for water supplies, this reflects the country’s vulnerability to a single basin, which itself is unstable due to on-going water disputes with India. The erratic water supply is further aggravated with variation in rainfall and melting of snow resulting in wide seasonal changes in river runoff throughout the year. More significantly, the overall availability, of said supplies, faces extreme risks from increasing pollution and climate change. All the while, on account of the growing population and rapid urbanization, the demand for water is rising exponentially. Due to this imbalance the country is being pushed towards severe water deficiency.

Pakistan is well below the standard minimum 1,000-day water storage capacity, that is recommended for a country with its climatic characteristics, with its storage capacity restricted to a maximum 30-day supply. The 2 major dams, Tarbela and Mangla, have piled enormous silt deposits since their construction, and they can only store less than 10 per cent of the annual river flows, that is 14 Million Acre Feet (MAF) of the 145 MAF that the country receives. Due to this lack of storage capacity, Pakistan wastes an astonishing US$ 22 billion of water into the Arabian Sea each year. Poor water management is roughly estimated to cost 4 per cent of GDP every year which is around US$12 billion. These costs are dominated by inadequate domestic water supply and sanitation, but also include the costs of floods and droughts. Furthermore, water availability per capita in 2017 fell down to 908 cubic meters from the 5,260 cubic meter in 1951. With water availability per person declining at such an alarming rate year by year, Pakistan faces a water crisis which has become a major social and economic problem regarding serious concerns for its future economic and food security.

The long-term water sustainability in Pakistan is also susceptible to shifts in the weather pattern due to climate change. The main implication for Pakistan’s water resources in this regard, is the expected decline in water flow in the Indus River basin as the glaciers of the Hindu Kush-Karakorum-Himalaya mountains are being lost. Certain evidence has been collected that shows that the amount of water flowing into the Indus River system has declined in recent years. This is a huge concern considering that snow and ice melt runoff currently produces around 50 to 80 per cent of the average water flow in the Indus River basin.

The Indus River Irrigation system is characterized by large inefficiencies at the canal, watercourse and field levels; only about 30 per cent of water flowing through the system is delivered to farms, and farmers at the tail end of the system rarely get water. Greater effort to promote the uptake of high-efficiency irrigation systems by smallholder farmers, along with infrastructure investments such as canal upgrades and precision land levelling, would be important steps to improve the situation.

The government of Pakistan needs to take certain steps to ensure that Pakistan becomes a water-secure state for its survival. Following are certain measures that can be taken towards that: 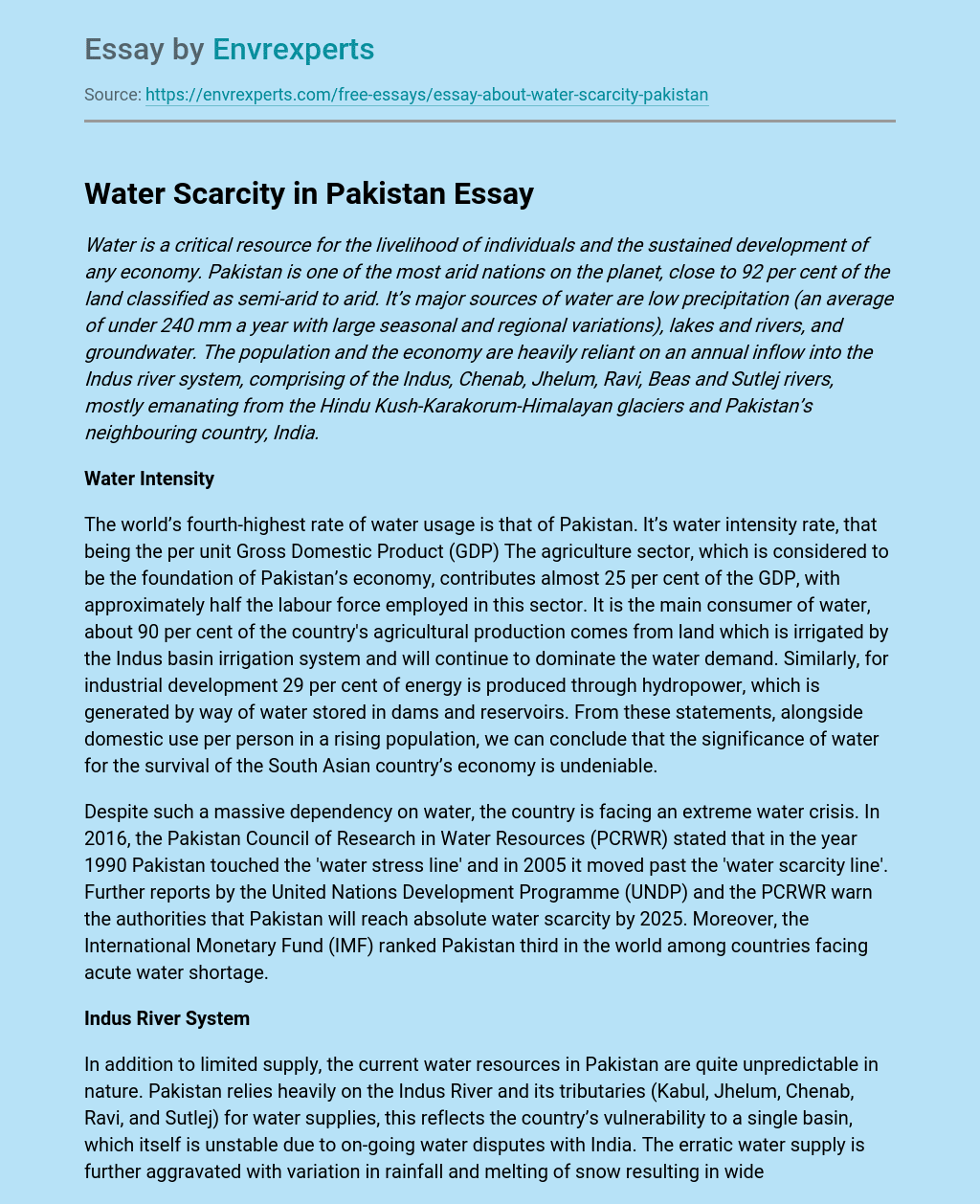