Water Specie and Pollution in Pakistan

A fresh water specie, Cirrhinus mrigala belongs to the family ciprinidae. The genetic structure information of this cultivable fish is necessary for the study of molecular systematics. At different levels, the resources of fisheries are negatively affected by human activities like overexploitation, environmental deterioration etc. In the maintainance of many issues of genetic management in any stock of fish, molecular markers are useful. The proposed research work would be conducted to assess the genetic diversity of the Cirrhinus mrigala in wild cultivation of River Punjnad, Bahawalpur, Punjab, Pakistan.

Don’t waste time
Get a verified writer to help you with Water Specie and Pollution in Pakistan
Hire writer
$35.80 for a 2-page paper

In this project, the populations of Major carp i.e. Cirrhinus mrigala will be assayed by using sixteen polymorphic microsatellite DNA markers. The application of these markers is that they gives systematic observations which are important in aquaculture practice. The sampling of fishes would be done from the target site and transferred to the laboratory for subsequent genomic DNA extraction and genotyping. For the calculation of various parameters of population genetics like heterozygosity, allele frequency, inbreeding coefficient population differentiation etc the allelic data would be used.

The total number of fish collected as a sample is 175. The muscle tissue is extracted from the fish for DNA extraction. The PCR is used for the amplification. The product of PCR will then be separatedand visualized by using gel electrophoresis. The analytical packages for the subject purpose include FSTAT, GENEPOP, ARLEQUIN, TFPGA and POPGENE.

The most famous cultivable specie of fish, namely Cirrhinus mrigala is involved in our current study. This fish is important commercially as well as economically.

In Pakistan, this specie is highly cultivated and is productive. The knowledge of the structure of genetic makeup is essential for breeding, stocking, managing balanced production and for the genetic diversity conservation (H.K Barman et al., 2003). For the sake of its genetic diversity information, microsatellite DNA markers are used. Our current study will provide information about the genetic diversity and genotyping of Cirrhinus mrigala collected from River Punjnad, Bahawalpur, Punjab, Pakistan using microsatellite DNA markers, usually referred as an advanced and more significant type of DNA marker. The microsatellites have repeated sequences of nucleotides with repeating size of approximately 1 kb. In some other studies, two categories are sketched, one called microsatellite and the other as minisatellite group. The microsatellite group bear repeating order lower than 9 bp and minisatellite group bear order more than 9 bp (Hodel et al., 2016 , Vieira et al., 2016 , Saeed et al., 2004). The proposed repeating order size differs in various genome regions (Vieira et al. 2016).

The genetic diversity of Cirrhinus mrigala, a most important commercial fish is demolished because of the indigent administration of the broodstocking, inbreeding and loss of essential features of their genetics. The genetic invigilation is necessary for administration of genetic diversity and its identification. There are a lot of factors that results in the degradation of genetic diversity of Cirrhinus mrigala including human activities like introduction of other species for their benefit, loss of habitat, water pollution and overhunting etc. The human activities are the cause for loss of genetic diversity of wild fish species (Frankham, 2003). In the rivers of Punjab, Pakistan, the anthropogenic interventions leads to the high degradation of fish production, the genetic variability of fish and the genetic diversity of fish. The construction of dams and bridges results as a barrier for the migration and thus have a negative effect in their life cycles thus degrading their genetic diversity (Agosthinho et al., 2008). The scheduled systems for selective breeding are not accessible in Pakistan for this specie (Cirrhinus mrigala). For the production of offsprings in hatcheries or in fish farms, the fishes employed are collected from various supply beyond knowing the specific genetically record and previous achievement information. In addition, brief information is needed for the genetic advancement of Cirrhinus mrigala as for the sake of suited systems of breeding and efficacious state of this specie, this type of knowledge is useful.

As the genetic diversity analysis using microsatellite DNA markers of the major carp, Cirrhinus mrigala is never been studied in Pakistan before. Only a limited data is available on the genetic diversity of this specie. For the amplification of microsatellite locus in the Cirrhinus mrigala , one of the famous major carps K.K.Lal et al. (1882) observed four fishes and found that forty-four sequences of primer are present. There occurred auspicious amplification of 12 loci with prominent patterns and five were showed polymorphic. The competency of known loci in the structure analysis of population of C. mrigala was studied. Total number of specimens taken were 76 from which the genetic variation was to be observed. These samples were taken from five various rivers. The heterozygosity closely ordered from 0.247 to 0.333 was detected. In the constancy of allele, eloquent heterogeneity was observed which shows that observed models did not reside to population which is homogenous. The known microsatellite markers are able for the study of intraspecific alteration in mrigal beyond its circulating area.

For the study of genetic diversity H.K. Barman et al. (2003) used RAPD assay. The knowledge of genetic structure of those fish species which are capable of being farmed is necessary for analysis of molecular order and modifying fisheries administration and farming of fish for maximum production. To estimate the analysis of genetic relation and diversity in specie of major carps random amplified polymorphic DNA is used. For the assimilation of RAPD markers specific for particular species 34 superficial primers were concealed. In those species RAPD was recognized with high level of genetic diversity. The mean calculation showed that 45% RAPD bands were particular to specific specie. The study done om the basis of phylogenetic relation showed the relation between species. The resulted data gives significance of RAPD markers for identification, study of genetic variability and taxonomic relation.

The population structure and the diversity of mrigal was studied by S.P. Das et al. (2017). The partial mitochondrial ATPase 6 gene was used. The specimens were collected from six different rivers of India. The specimens collected were 155 in number. A less level of genetic diversity occured showing 0.00154 value of diversity of nucleotide and 0.46711 value of haplotype diversity if all were 11 haplotypes. AMOVA was applied and the result demonstrated that in a population, genetic variation was 97.535% and among population variation was 2.47%. In an overview, the index of fixation was 0.02466. The study of Fst demonstrated genetic variation between species of population. The lowest data obtained from halotyping showed tree in which populations of mrigal showed origin of common ancestory. From that studythe result revealed that there is less degree of genetic variability in the population of mrigal present in rivers of India. That type of study could be necessary for making systems for betterment of genetic information and for the genetic conservation of mrigal. This study showed that mrigal collected from various regions have come into being from common ancestor. In the period of Eocene, it is assumed that genus Cirrhinus come inside the rivers of India which showed that the originating point was common. The partial ATPase 6 gene resulted as a marker to study the degree of divergence in a population.

Water Specie and Pollution in Pakistan. (2021, Oct 31). Retrieved from http://envrexperts.com/free-essays/essay-about-water-specie-and-pollution-pakistan 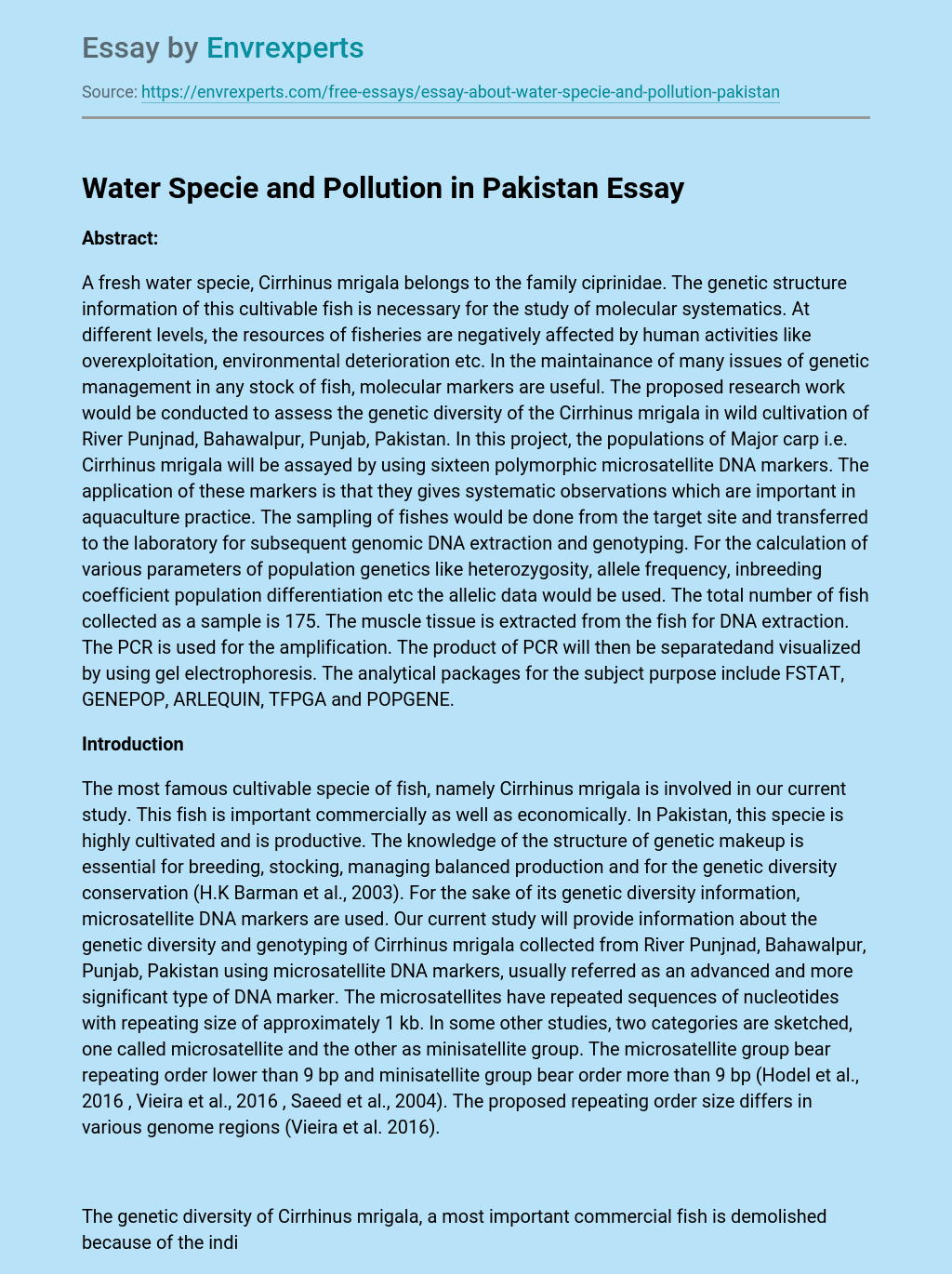