A forest is defined by Merriam Webster as “a dense growth of trees and underbrush covering a large tract”. Animals breathe in oxygen and breathe out carbon dioxide. The trees in the forest take in carbon dioxide and give off oxygen during photosynthesis. This is an example of one of the many symbiotic relationships in the forest ecosystem. The trees are able to grow because of good sources of water throughout the year. This is one of the things that separate a forest from another ecosystem like a desert.

Don’t waste time
Get a verified writer to help you with What Is Forest?
Hire writer
$35.80 for a 2-page paper

The more trees there are the cooler the forest floor can stay because of the shade. The cool, shady, damp conditions of the forest floor are a perfect place for fungus to grow. Fungi are very important to the forest ecosystem. They can help the plant’s roots or they can kill plants when the trees need thinning out. One animal you might find in the forest is the wood mouse.

According to The Mammal Society, a Wood Mouse lives in forests throughout the United Kingdom. This type of mouse is nocturnal. They come out at night in search of seeds, green plants, and fruit for food. They also eat worms, insects, and fungi.

The wood mouse often hides the food that it finds in underground burrows. One predaitor of the Wood Mouse is the Tawny Owl. The Tawny owl is the most common and widespread owl in Europe. They mostly live in forests, but have been know to nest in cities that have large parks full of trees.

A full-grown Tawny owl weighs about a pound and has a wingspan of around three feet. Tawny Owls hunt at night. Their eyes are well adapted to seeing in low light. Once the owl detects its prey, he will glide silently down and kills with its strong, sharp talons. The Tawny Owl plays an important role as a predaitor helping to keep the population of mice and other rodents from exploding. The following is an example of a battle between predator and prey that goes on in forest night after night. The owl perched on his branch waiting for its prey. The mouse scurrying around on the leaved covered forest floor looking for food. The owl listens carefully, then he hears it, the soft rustling of the mouse. The owl springs up from the branch. The mouse knew the owl heard him rustling around. The mouse acts quickly and bolts away heading toward his burrow between the split tree. With the owl closing in, thinking about what a tasty dinner it’s going to be for him.

The mouse running for his life only looking at his home thinking this going to be the end. Then when the owl was just inches away from him, talons outstretched. The mouse got away and the owl had no dinner for that night. The next night the owl went to the same branch, waiting for the some mouse at the same time. At the same moment, the owl heard the mouses rustle. The owl stretched his wing and started to chase the mouse one last time. Closer, and closer, then the mouse was his at last. Dinner is served, the mouse is dead and the owl has dinner for the night. That type of battle is important because if the population of the mice died out there would be no food for the owl. Then the owls would die off. Then the mice population would skyrocket that there are not enough predators to keep the population down.

What Is Forest?. (2021, Oct 31). Retrieved from http://envrexperts.com/free-essays/essay-about-what-forest 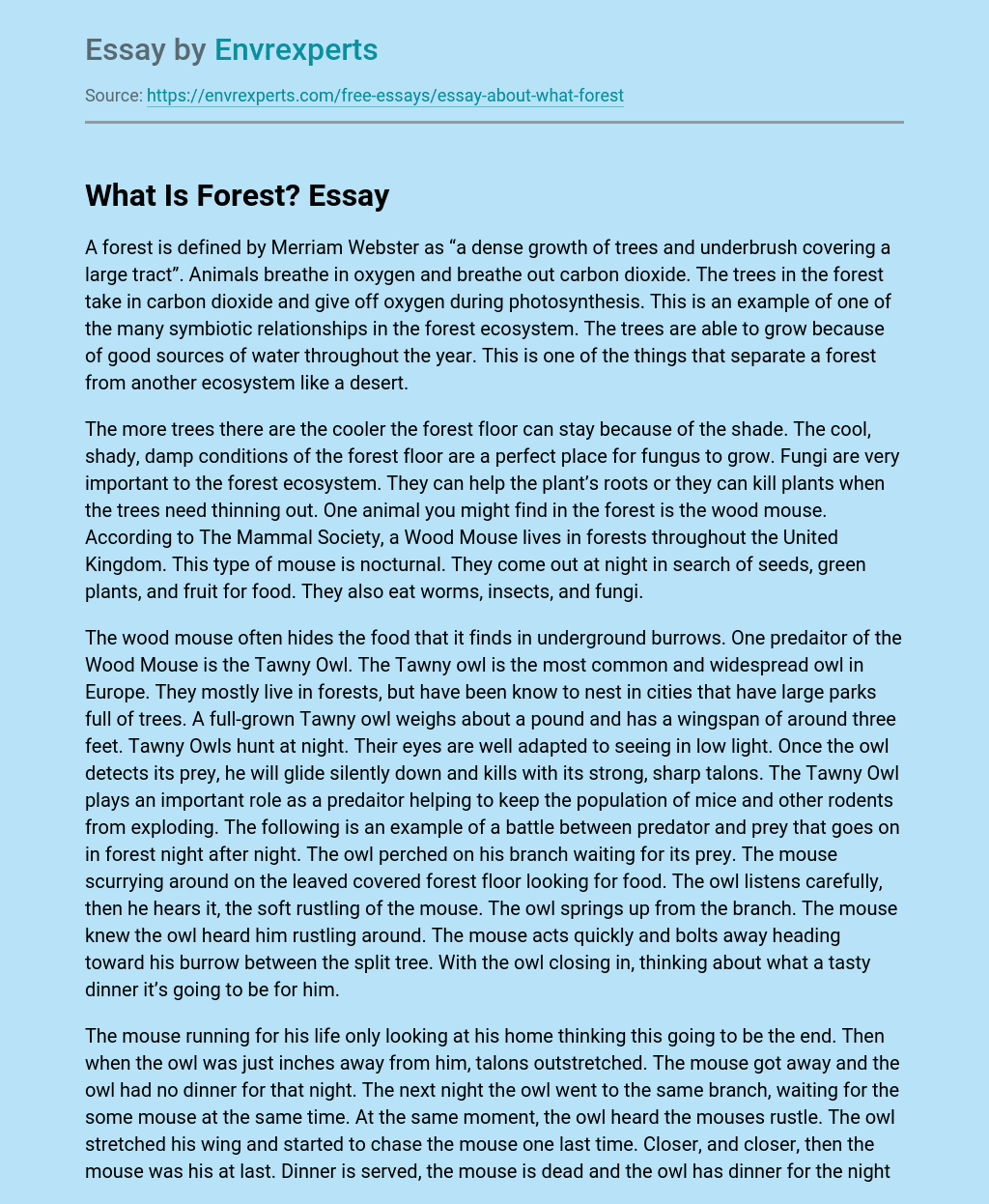