What We Can Do WIth Global Warming

We Can't Go Back; But We Can Change Now

May and June of 2014 were the hottest May and June recorded ever on Earth in human history(Global Analysis). The climate of our Earth will continue to increase unless carbon dioxide and greenhouse gas emissions are cut drastically. Global warming is real and happening. The reality of climate change due to human activities has been widely accepted by scientists throughout the world. As the effects of global warming create a growing danger for the ecosystems we live in, some choose to unthinkingly disregard the evidence and science of our man-made climate change, which could be detrimental to our planet.

Don’t waste time
Get a verified writer to help you with What We Can Do WIth Global Warming
Hire writer
$35.80 for a 2-page paper

It's difficult to think of many things powerful enough to disrupt life across the entire planet. Natural disasters can affect thousands of people, but their impacts are usually confined to just one region of the world. Nothing can quite alter all human life like global warming. Global warming is the gradual rising of the Earth's temperature, which represents a threat greater than anything humans have faced in recent history.

The main cause of this temperature change is greenhouse gases- gases that trap heat radiation in the Earth's atmosphere, some heat radiation is supposed to escape back into space. This natural processes is called the natural greenhouse effect, and is good for our planet! It maintains a generally warm climate on Earth. Without it, Earth would be too cold to support such a huge diversity of life; but the Blum 2 greenhouse effect alongside the pollution of human industry has been proven to be detrimental to our earth.

Since the Industrial Revolution in the 18th and 19th centuries, humans have been using energy and burning fossil fuels in large quantities. A chemical process called combustion, used in most industry and vehicles, is the burning of gasoline with oxygen from the air. As a byproduct, combustion emits invisible carbon dioxide gas. The burning of all fuels like coal, gas, and oil will emit carbon dioxide. The carbon dioxide drifts up into the atmosphere and makes Earth’s greenhouse gas thicker. This is called the enhanced greenhouse effect. As a result, more of the Sun's heat gets trapped inside the atmosphere and the planet warms up. To summarize: burning fossil fuels gives off carbon dioxide, which enhances the greenhouse effect and heats the planet the process known as global warming. This is often described as an anthropogenic process, which simply means “humans cause it.” Some dispute that global warming is not anthropogenic, but is simply the natural heating and cooling of the Earth, similarly to the drastic Ice Age temperature drop.

The proof of global warming stretches beyond scientific processes and speculation. In the late 19th century, after the industrial revolution, scientists first theorized that human emissions could change the climate. Many theories for natural carbon dioxide level increases were developed, such as volcanism: emissions created from magma within the crust or mantle of the earth rise through the crust, forming volcanic rocks and carbon dioxide on the surface. Another theory was created, Solar variation, where scientists believed the change in the sun and its spectral distribution over the years could possibly cause an increase in carbon dioxide. Both of these theories were disproved, along with the theory of human industry. By 1927, industry and automobiles had already taken a toll on the earth. Carbon emissions from fossil fuel burning and industry reached 2,204 pounds per year. In 1957, US oceanographer Roger Revelle and a chemist Hans Suess found that seawater will not absorb all the additional carbon dioxide entering the atmosphere, many assumed water would clean the air of carbon dioxide indefinitely. A year later, Charles David Keeling began systematic measurements of atmospheric carbon dioxide at Mauna Loa in Hawaii and in Antarctica. Within four years, the project, which continues today, provided the first unquestionable proof that carbon dioxide emissions were rising. In the 1960s, the human population on Earth reached three billion and warming effect of carbon dioxide gas became increasingly convincing, although some scientists argued that human activities (primarily aerosols) could have cooling effects as well. During the 70s, scientific opinion increasingly favored global warming-like viewpoints. By 1975 the world population had increased to four billion. In the 90s, improvement in computer models and lab work confirming the Milankovitch theory, that variations in Earth's orbit determine climatic patterns on Earth, formed a consensus opinion among scientists: fossil fuels (used by mankind) were deeply involved in most climate changes, and human emissions were bringing serious global warming. By 1995 an IPCC Second Assessment Report concluded that evidence suggests "a discernible human influence” on the Earth's climate. This has been called the first definitive statement that humans are responsible for climate change (Brief History 1). In 2008, half a century after beginning observations at Mauna Loa, the Keeling project showed that carbon dioxide concentrations had risen from 315 parts per million in 1958 to 380 ppm in 2008, and to 400 ppm in 2013, a drastic increase (Biello 1).

Many people disregard the evidence of humans having an effect on global warming. Climate change has gone from being a scientific actuality to a political issue, used as an argument to bash parties of all persuasions to point fingers and gain supporters. Consequently, many people, including scientists and politicians, can't reach an agreement on the issue. US Senator James Inhofe is a prime example of politicians arguing against global warming. He sees global warming is miniscule and unimportant. He famously decreed that global warming was “the greatest hoax ever perpetrated on the American people,” Earlier this year he brought a snowball onto the Senate floor in hopes of underscoring his climate denial. The snowball was part of a rambling speech in which one of his main points was that he and his grandchildren were able to build an igloo near the Capitol building in Washington during a 2010 winter storm. Gavin Schmidt, a climate scientist and director of Nasa's Goddard Institute for Space Studies responded “I think it's lovely that Senator Inhofe enjoys the winter weather so much… I'm a winter sports fan myself. But there's a big difference between people playing with the snow, and global climate change,” (Woolf 1). Inhofe is the chair of the Senate environment committee, which is concerning given his misinformed views on how global warming is effecting our world. "Europe was toasty warm. Alaska was toasty warm. Australia was toasty warm. All these things cancel out the fact that it happens to be cold in Washington DC this week, said Schmidt (Woolfe 1). Inhofe and other congressmen have been known to declare any news or proposals regarding global warming as invalid or unimportant. The U.S. is responsible for the largest share of carbon dioxide and other greenhouse gases in the atmosphere, the country won't be able to take national legislative action on climate change anytime soon. The U.S. congress seems content to let climate change be neglected as a priority.

President Barack Obama stated “we don't have time for a meeting of the flat Earth society,” meaning, there is not much hoping in gaining support from congress (Biello 2). His administration has moved forward through the U.S. Environmental Protection Agency Clean Power Plan. The U.S. has also created a pact with China to reduce pollution. China committed to turning around it's growth in carbon emissions by 2030, or earlier if possible, while increasing the share of non-fossil fuels in energy production to 20 percent of its menu (Schwartz 1). But the growing problem of climate change won't be majorly helped with a pact between the U.S. and China. "The numbers I announced (change in emissions within a year of the U.S. and China agreement) are definitely encouraging, but it doesn't bring us to a happy ending yet,” said Fatih Birol, the chief economist and incoming executive director from the International Energy Agency. “If you want to see a happy ending, you want to see an agreement in Paris that will send a powerful signal to investors to go in the direction of low-carbon technologies," (Schwartz 2). Australia elected a climate skeptic as prime minister, who promptly repealed the carbon tax, and as a result pollution has promptly soared this year. 772 scientists wrote and edited a UN report published in March of 2015, the report argues that world leaders only have a few years left to reduce carbon emissions enough to avoid catastrophic warming, which would produce a significant sea level rise and drastic changes in temperatures that would dramatically disrupt ALL human life as well as natural ecosystems (Howard 2). In order to properly tackle this issue the world needs to come together and create an environmental policy, this is hard to do when congressmen can't see climate change for what it is- real.

Hope for our planet's future is diminished at the fact that some choose to disregard the subject of global warming as a whole. “Florida, a state most susceptible to the effects of climate change and sea-level rise, verbally banned state environmental officials from using the term 'climate change,' an investigation revealed” (Lewis 1). North Carolina, Tennessee and Louisiana have all passed laws that ban the accreditation of climate science in boardrooms and classrooms. North Carolina passed legislation banning the state from creating coastal policies on the most recent predictions of sea level rise, reported ABC news. Both Tennessee and Louisiana have outlawed the teaching of evolution and climate change theories in all classrooms. At least five other states have considered similar legislations. These legislations are threatening to our future. If the youth is taught to never question the credibility of these theories, they will continue to deny the hard facts of climate change, harming the future of our planet. "We need to keep kids' curiosity about science alive and not limit their ability to understand the world around them by exposing them to misinformation,” said Brenda Ekwurzel of the Union of Concerned Scientists (Lewis 3).

The world is losing in the battle against global warming. The scariest scientific fact released this year was found within the IPPC: The United Nations' Intergovernmental Panel on Climate Change, scientist's certainty that humans are behind the warming has reached 95%. Previous reports by the group didn't provide such hard language to describe future consequences or report such high confidence about humanity's role (Rice 1). The fact that politicians are critical of global warming scientific data and states are prohibiting the teaching of climate change in classrooms cast even more shadows, on an already dark future, for our planet. Every week, we're seeing new and inarguable climate events, evidence that accelerated climate change is here now. We know that droughts are intensifying, our oceans are warming and acidifying, we are seeing extreme weather events, increased temperatures, and the West Antarctic and Greenland ice-sheets are melting at incredibly fast rates, decades ahead of scientific predictions.

None of the things said by climate scientists are made up, and none of it is hysteria. It is fact. To be clear, this is not about just telling people to conserve energy or invest in a hybrid car or solar panels. This disaster has grown so large that the choices that individuals make will have no help to our planet. This is now about our industries, and governments around the world taking decisive, large-scale action. In order to take these large scale actions, politicians need to stop being skeptics and every child needs to be fully informed of the dire state of our Earth. Awareness and acceptance is going to be crucial to the future of life.

What We Can Do WIth Global Warming. (2021, Oct 31). Retrieved from http://envrexperts.com/free-essays/essay-about-what-we-can-do-global-warming 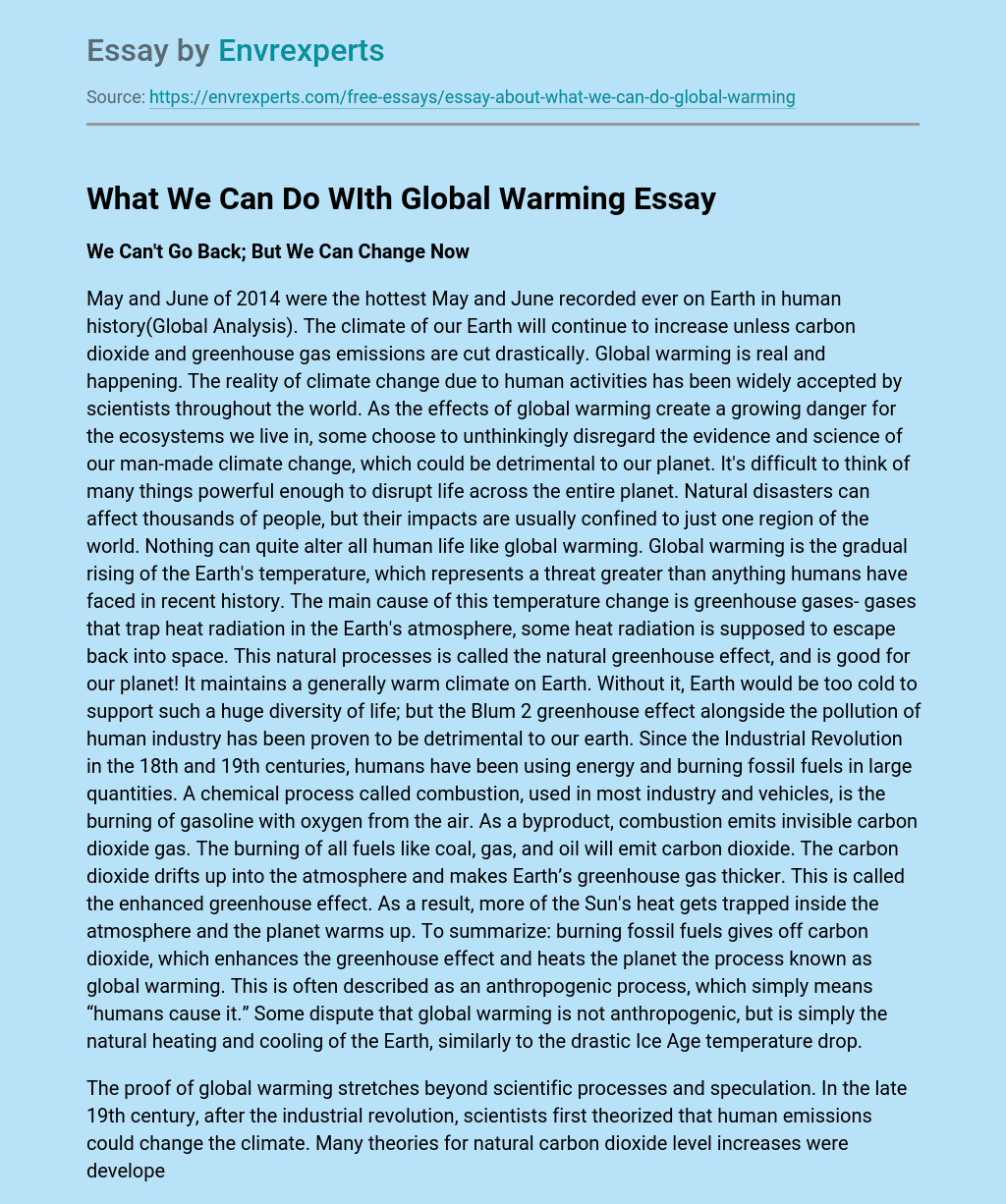