The next assertion of the claim is that there are sufficient developments in fusion technology to create energy.

Don’t waste time
Get a verified writer to help you with World Energy Crisis
Hire writer
$35.80 for a 2-page paper

Through initial research it can be found that the International Thermonuclear Experimental Reactor (ITER) will be the most likely to lead to developments in nuclear fusion (World Nuclear Association, 2019), and is expected to be the first device to be able to produce net energy (i.e. generate greater amounts of energy then is put into the reactor) (ITER Organization, n.d.).

Therefore if the development of the ITER led to nuclear fusion reactors that could generate enough of an energy surplus it would theoretically create limitless energy.

From these assertions the following research question was proposed, Will development of the ITER tokamak lead to nuclear fusion technology that could solve the energy crisis before natural resources are too depleted to maintain current usage? If this question can be proven through evidence then the claim could be supported.

In the core of the sun temperatures reach 15,000,000°C, therefore the hydrogen atoms are extremely energised and collide at high speeds, overcoming the natural electrostatic repulsion and fusing to form helium (ITER Organization, n.d.).

Mass lost in this transformation is converted into energy, through Einstein’s equation E=mc^2 creating great amounts of energy for relatively little mass lost. Through research conducted in the 20th century the deuterium-tritium fusion contained within a magnetic field appears to be the best potential source of nuclear power (Nave, 2006). However, for this reaction to occur the hydrogen must be heated to temperatures of 150,000,000°C where it forms plasma, thereby reducing the Coulomb barrier.

Difficulties arise in containing matter at such a high temperature, tokamak reactors use magnetic fields to control the plasma within, ensuring it cannot escape and cause damage due to the high temperatures. The reaction that occurs follows, (_1^2)H 〖+ 〗_1^3 H→(_2^4)He+(_0^1)n+17.59 MeV. The helium atom will have an electrical charge and therefore will be able to be controlled by the magnets, unlike however the nucleus, which will fly off into the walls. Within this reaction approximately 80% of the energy yield is within the neutron, therefore it is not as easily utilised as if it were a charged particle (Nave, 2006). Despite this the ITER tokamak reactor aims to absorb into the surrounding walls, with their kinetic energy being transformed into heat energy.

The generated heat energy will be captured by cooling water circulating the reactor. In future tokamak reactors used for electrical generation, this heat will be used to produce steam and – through turbines and alternates – electricity (ITER Organization, n.d.). The reactor currently designed and being built can be seen in Figure 1. If the ITER tokamak proves nuclear fusion to be viable for energy production then the conceptual DEMO projects will be utilised. Sustainability of manufacturing and running of ITER tokamak For the ITER tokamak reactor to ‘solve the energy crisis’ it first must be found if there are enough global resources for the development and construction of nuclear fusion based power plants.

The reaction that occurs for the energy production requires deuterium and tritium. Of the two deuterium is readily available, with approximately 1 part in every 5000 of the hydrogen in seawater being deuterium (Nave, 2006). The tritium however is more difficult to acquire, due to its 10 year half-life nature there is no sizable naturally occurring source.

Currently the most effective way to acquire tritium is tritium breeding, done through the bombardment of lithium-6 with neutrons through the following reaction using slow neutrons, (_3^6)Li+(_0^1)n→(_2^4)He+(_1^3)H+4.8MeV. Lithium-6 makes up 7.4% of natural lithium. Therefore the abundance of lithium is the limiting factor, however with an approximate 1.8×〖10〗^18kg of lithium in the earth’s crust it can be reasonably predicted that there will be sufficient lithium. The ITER tokamak reactor will weight approximately 23,000 tonnes, with the majority of the weight coming from the magnets which will weigh 10,000 tonnes.

This includes 500 tonnes of niobium-tin (Nb3Sn) which has increased global production of niobium-tin form 15 tonnes a year to 100 (ITER Organization, n.d.). There is an expected 500 years’ worth of niobium in the Earth’s crust which should allow for the construction of many tokamak reactors if the ITER tests prove nuclear fusion to be viable (Ross, 2018). The construction process for the ITER tokamak involves over 1 million components, which are being sourced from the ITER member nations.

If large scale production of tokamaks were to take place then the production process would need to be sped up, as construction started in 2010, and the first plasma is not expected until 2025 (ITER Organization, n.d.). However with practice and through refining the processes this time should be able to be reduced to be more feasible for electrical production. \n Global energy crisis and the ITER tokamak The Global Energy Crisis is the Earth wide escalation of global energy demand, continued dependence on fossil fuel based power and the increase in global population (Coyle & Simmons, 2014), which if the dependence on non-renewable energy is maintained will cause global shortages in energy. Global energy production currently constitutes of, 38% coal, 23% natural gas, and 3% oil (International Energy Agency, n.d.).

However it must be noted that oil is used predominantly in fuel for transportation, with by products used in the production of plastics and other chemicals (appea, n.d.). Figure 2 shows the predicted number of years of fossil fuel reserves remaining, but these values are extremely difficult to predict due to improvements in technology, discovery of new reserves and changes in annual production (Ritchie, 2017). Whilst the depleting levels of fossil fuels will not become an issue for 50-100 years the impacts of carbon emissions through climate change will occur earlier.

For global temperatures to be kept below the 2°C increase agreed in the UN Paris agreement a significant portion of the remaining fossil fuels would have to remain unburnt, approximately 60 (Alexander, et al., 2013). However as long as the ITER tokamak leads to sufficient developments that solve the energy crisis the claim can be considered correct. Global energy consumption in 2018 was equivalent to 13864.9 million tonnes of oil, equal to approximately 1,612,488 TWh. Of this 84.7% is from fossil fuel based power, coal, oil or natural gas (BP, 2019).

The ITER tokamak is expected to produce 500MW over 400 seconds. The successor to the ITER, DEMO1 and the more advanced DEMO2 model are the designs currently being investigated by the EU if the ITER proves fusion power to be usable. The DEMO2 model is expected to produce yearly approximately 6.3TWh of electricity if the theoretical model is correct (Dlouhy, Dostal, Horacek, & Entler, 2018). Therefore 255,950 nuclear reactors of that style would be required for full replacement of fossil fuel based energy production. To put that into perspective globally there are 7269 operating coal fired power plants, which account for 40% of electricity production (GLOBAL ENERGY MONITER, n.d.), although the 255,950 nuclear reactors also includes all fuel consumption.

Feasibility The economic feasibility analysis will be based upon the, Approximation of the economy of fusion energy, which uses the DEMO2 for energy production and costs (Dlouhy, Dostal, Horacek, & Entler, 2018). The capital investment of constructing a DEMO2 model power plant will approximate to $8,525 million, which includes construction and maintenance equipment. However of this cost fusion specific technologies account for around 75% of costs, and as they have not been produced before will likely be less costly when produced in mass.

The predicted cost of producing electricity through DEMO2 is 59.31 $/MWh. For zero profitability the electricity generated would need to be sold for 175 $/MWh, compared to the Queensland 2018 electricity price of 73 $/MWh (Australian Energy Market Commission , 2020). This price would be too high for viable commercial sale, although it is not uncommon for subsidies for renewable energy to be given. Fossil fuel subsidies currently total $29 billion in Australia and $5.2 trillion globally which that could be put towards nuclear fusion (Mazengarb, 2019).

In 2012 the EU subsidised offshore wind by 136 $/MWh, which if put towards fusion would give it competitive pricing. For the replacement of all fossil fuel energy production a previously mentioned 255,950 nuclear reactors would need to be build. With the expected operation of the first generation DEMO reactor being 2040, depending on the success of the ITER reactor, an approximate 8,530 nuclear reactors would need to be constructed and be put into operation yearly until 2070 when oil and gas reserves are predicted to be fully depleted.

Considering the time it has taken for the construction of the singular ITER reactor, which will be smaller than its electricity generating counterparts, it would seem unlikely this number could be achieved. Although with increases in energy production through other forms of renewable energy such as hydro, nuclear fusion may need to replace proportionally less fossil fuel based power production. In this model presented by BloombergNEF suggests that fossil fuel will make up 31% of all energy production by 2050, greatly diminishing the quantity of nuclear reactors that would be required for global replacement (Henbest, et al., 2020).

Quality of evidence The majority of evidence sourced on the ITER tokamak device itself was sourced from the ITER organisations website. This could present a conflict of interests as the organisation may want to present itself in a more preferable manner. However this is highly unlikely as ITER is the organisations that 35 countries, including many of the global superpowers, are helping to fund to prove the feasibility of nuclear fusion. So it is probable that the website is highly scrutinized for potential misinformation.

Furthermore due to the international effort it would be expected that countries themselves ensure that the organisation is not negligent, dishonest or biased. In addition little evidence was presented in the materials required in the construction of the ITER tokamak, therefore restricting the evidence for feasibly mass producing tokamak reactors for power generation. \nAdditionally the majority of scientific explanation came from the HyperPhysics website, but the website is run by Georgia State University so it can be assumed to be reliable.

Finally the economic feasibility study was conducted on the DEMO2 model, which has not been constructed, has no plans for construction and will only be built if the ITER experiments are positive.\n Evaluation of the claim The research question, “Will development of the ITER tokamak lead to nuclear fusion technology that could solve the energy crisis before natural resources are too depleted to maintain current usage?” was addressed through evidence. The evidence found suggests that the development of nuclear fusion technology greatly depended on the results found by the ITER tokamak. If it were to prove successful in showing the effectiveness of fusion power then developments such as the DEMO project will likely be able to produce commercial electricity.

Although the costs of construction and electricity production could prove to be detrimental, but through subsidies potentially overcome. These findings when applied to the claim suggest that the evidence collected in this investigation does weakly support the claim.\nImprovements and extensions to the investigation To improve this investigation further evidence for the potential of nuclear fusion in power generation is required. However due to it not being currently tested on the scale of ITER there is very little information available, so in a few years it is likely that more evidence could be found.

Additionally more research is required for understanding the components of the ITER reactor and if there are enough resources for mass production of tokamak reactors. If it were to be found that there were limits to the natural resources required in the manufacturing of the reactors then that would limit potential energy production.

Through the investigation it can be seen that there is evidence for nuclear fusion power as a solution to the global energy crisis. However it relies upon subsidies to make electricity generated economically viable, and the reduction of the market share of fossil fuel based power due to the increased usage of renewables. Therefore the claim, Development of nuclear fusion technology would solve the global energy crisis, can be seen as true, under specific circumstances. 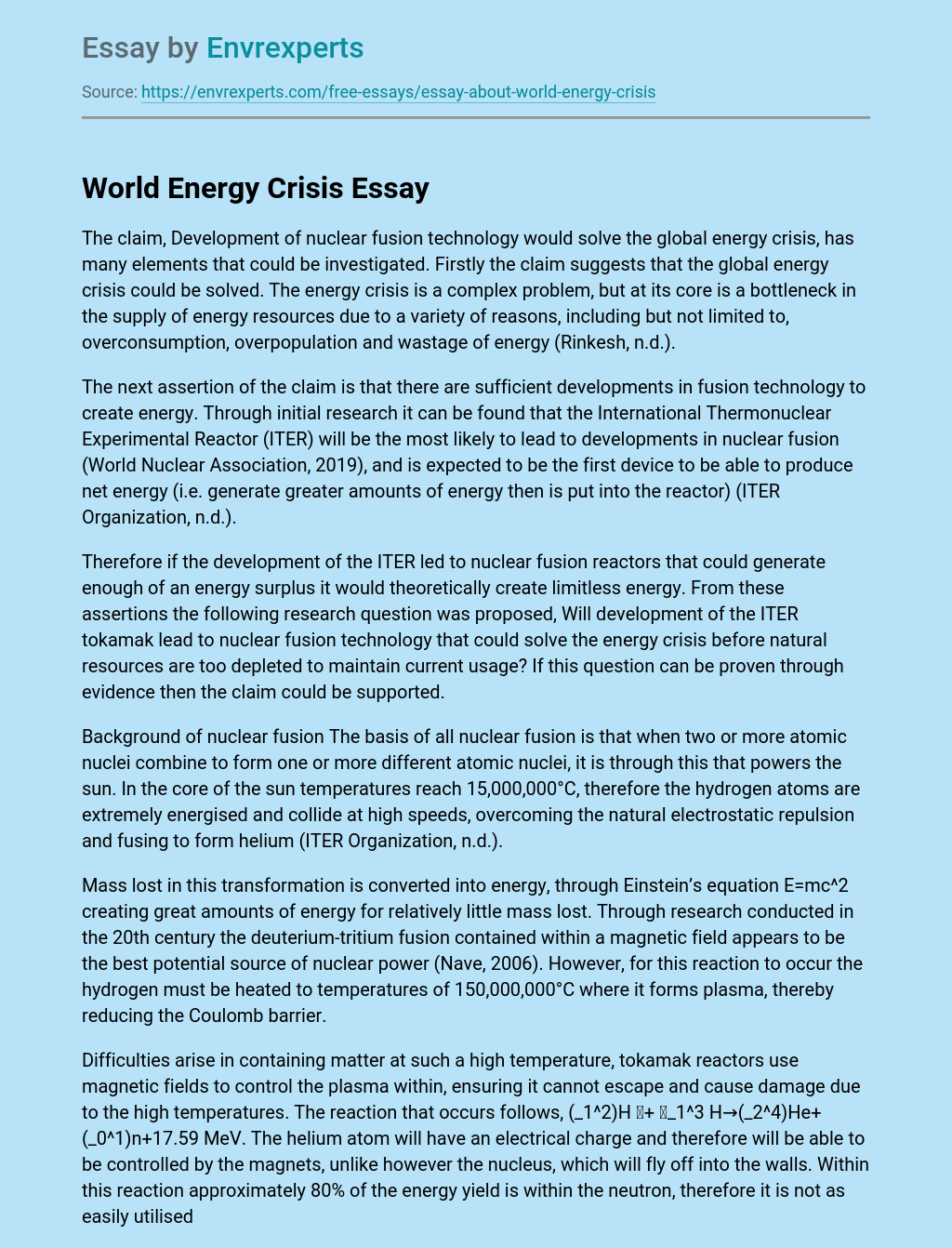