Global water crisis refers to a situation where availability of unpolluted and potable water within a region is considered to be less than region's demand. Water scarcity is being influenced by two converging phenomena i.e. depletion of usable freshwater sources and perhaps growing fresh water use (Barlow, 2010). Every day in poor urban, undeveloped and developing countries and perhaps rural communities globally, hundreds of millions of individuals experiences hardship from inadequate or lack of access to safe and clean water.

Don’t waste time
Get a verified writer to help you with The World Water Crisis Problem
Hire writer
$35.80 for a 2-page paper

In most cases, the female gender is compromised by the burden of tracking miles at a time search for water from streams and ponds which are not safe for human consumption. It is crystal clear that dirty water intake and time lost searching for it has greatly robes entire communities globally of their futures. The purpose of the paper is to critically describe and analyze global water crisis.

In every 20 years, global water consumption is doubling more than twice the rate of human population growth.

As per the United Nations, more than one billion of the population already lacks the access to clean and safe water. Freshwater comprises a minuscule portion of all water globally. While nearly 70% of the globe is covered by water with only 2.5 percent of the total is fresh i.e. the rest are saline and ocean based. Furthermore, just 1 percent of the freshwater is easily accessible, with much of it trapped in glaciers and snowfields. According to Vörösmarty et al.

(286), the availability of amount of freshwater water supply is declining, and its sides effects are on the rise. The dangers associated with scarcity of freshwater is increasing, meaning that the probability of a decline in available freshwater and an increase in the impact of the ensuing problems is growing. As per the Grafton et al. (317), water supply crisis is often the highest impact and most likely threats facing the planet. In world economic forum, the water crisis is ranked as being more likely and having a greater impact globally than risk imposed by food shortage crises, cyber attack, geographical destruction, and terrorism among other hazards. Fresh water supply is not only confined to the scarcity of drinking water but also low water levels in waterways.

According to Hanjra et al. (369), 85 percent of the world population thrives in the driest half of the globe. 783 million of the population lacks the access to clean and safe water and almost 2.5 billion do not have adequate access to sanitation. Arrange of 6 to 8 million people die every year from the consequence of disasters imposed by the water-related diseases. As per Jury et al. (9), apart from political instability, climate change and ethnic conflict as some of the causes of poverty, but one of the greatest causes of poverty in Africa and globally is a lack of access to clean drinking water. Almost one billion of the population which is equivalent 1 in 8 people on the globe and they categorized poverty as a fact of life. The three water crisis influenced by dwindling freshwater supplies, corporate control of water and inadequate access to water has posed the greatest threats to human survival globally (Barlow & Maude, 125). These threats have also been fueled by the pending climate change from fossil fuel emission. Therefore, the water crises impose some life or death decision to mankind. According to the future projections, when the human behavior on natural resources is not controlled, it may lead to a deepening conflict on potential wars over the dwindling supplies of fresh water globally.

Possible solution towards water crisis According to Barlow & Maude, 2009, civil society movement recently was established to wrest control of water back from profit making bodies and reclaim it for the public use and nature. It was referred to as the Blue Planet Project; the movement composes of environmentalist, farmers, and indigenous people, urban activists who forced water as part of the human right and public sector workers alliances. The project had the first global citizens' summit on water which was held in Vancouver (July 2001). Inadequate supply of fresh water is a global crisis of highest importance. This is known t be facilitated by the world's growing population and the ever increasing water consumption alongside it. The sides effects of failing to extensively address the crisis will be severe, including the possibility of global conflict. Globally people should concentrate on water conservation, increasing of fresh water supply and establishment of world water treaties to ensure and champion for equitable distribution of existing water supplies. Furthermore, desalination of seawater project should be implemented throughout the world. This will lead to increasing supply of fresh water as salty or brackish water will be made drinkable.

In conclusion, throughout history, global population has been confronted by water scarcity as the primary challenge. Water is known as a source of life and perhaps natural resources that support livelihood and sustain our environments. Projection of future of freshwater availability and adequacy is difficult to assess and possibly predict, as a result of complex and rapid changing of geographic of freshwater supply and use. Numeric researches and experimentsthat include climate model output, socioeconomic data with digitized streams and river network and water budgets. They project that a large global population is currently experiencing water shortage and stress and increase demands of freshwater significantly outweigh greenhouse warming. 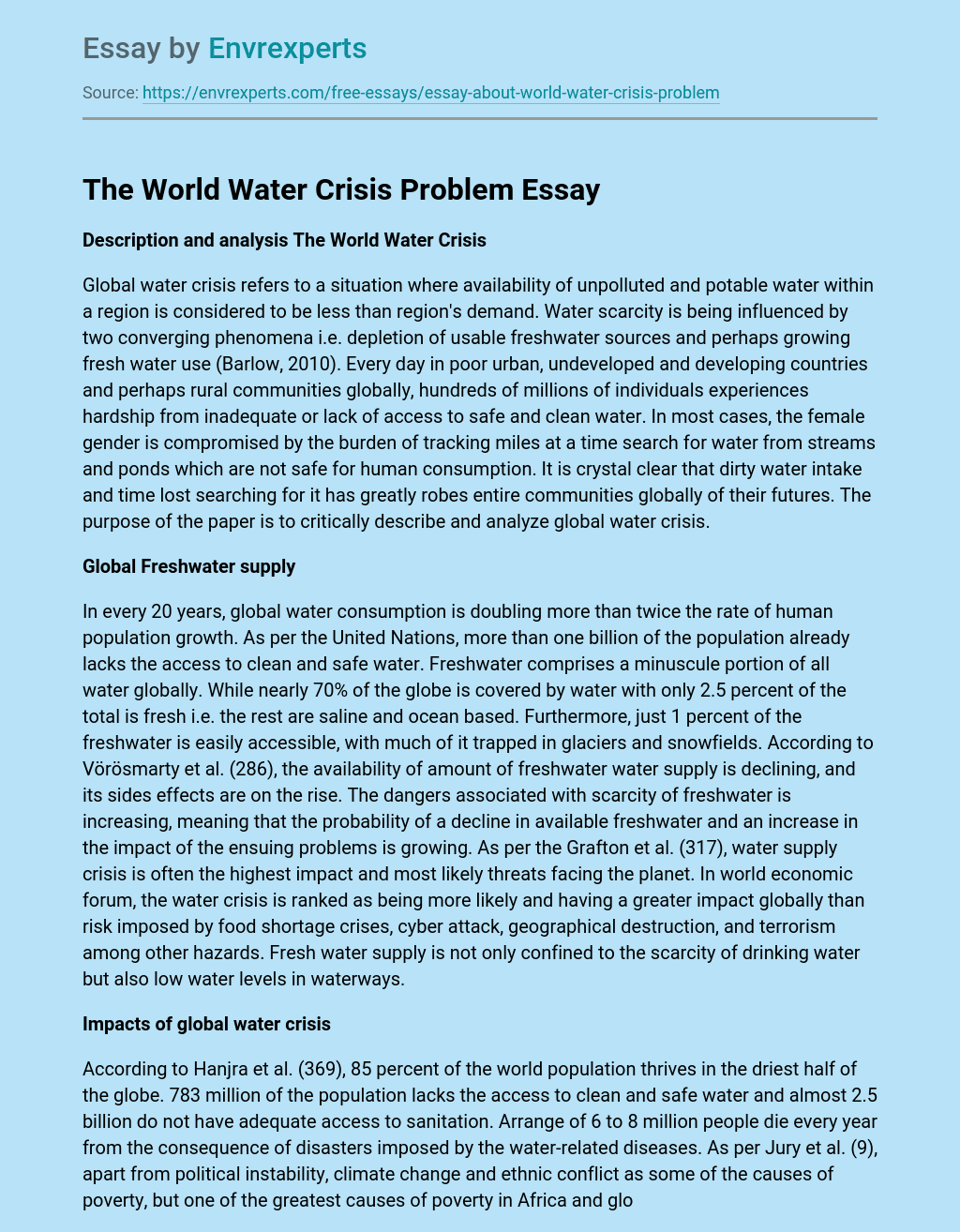