Psychiatrist Keith Ablow has the opinion that the young generations are rising and expanding a bad way of lifestyle by making up lies under their narcissism as well ignoring reality and creating false reality of themselves. Also, believing that social media, computer games and phones is one of the many ways it helps them with their narcissism to develop stronger while losing their ethical manners when being around society. Not to mention, the author adds the way it impacts others it’s like an epidemic.

Don’t waste time
Get a verified writer to help you with Young Generation and Environmental Issues
Hire writer
$35.80 for a 2-page paper

Therefore, the author suggest to come up quickly with a plan together to combat the generations of deluded narcissism as if not done quickly when realizing there is a problem, they will not be there anymore to help. Not only does this show the author concerns about his topic but, is trying to convey that there should be immediate movement incentive to solve as what he sees a problem. The author also, realizes that he has somewhat of limited time to find a solution.

Author uses analysis of the American Freshman Survey and Psychologist Jean Twenge to support his position. I believe that this both evidence are good. Because, it address that they have accumulated data for around 47 years. Therefore, this obviously makes this unique from a simple evidence statement as this comes with backup support from past gather information.

On the other hand, the author presents a psychologist which he gives a statement and supports this by a few years of experience history of working with previous articles similar to this article.

Which the reader can easily tell there’s been a gathering of some knowledge information put into the authors position. The author uses information such as twitter, Facebook, MTV, computer games and mobile devices to which help him convey the idea that adolescents and young adults have many ways to maintain they narcissism. In addition, this helps further to the author’s position as he shows they develop false fame, pride, love and not living anything like a normal life. Last but not least, the author is not giving only statements but, is including factual information. After reading the article, I do not agree with the statement. For the reason of, what if the young adults or adolescents that are being tagged as rising a generation of deluded narcissism are just being raised by the deluded narcissists from the previous generation. Meaning that there’s really no reasoning behind that statement unless you give it value. We have different ways of doing things as we do of thinking and that’s why we are all different but agreeing with the statement is like supporting a personal bias. Additionally, another reason why I disagree is because the statement speaks for itself.

Clearly, this sounds like something hoax to agree on. It’s really like saying all people who are in jail are bad people. Which we all know that’s not true so once again, not because it sounds right means that is right. As a result, Dr. Twenge found that generations always do a pattern of trends. Therefore, if the previous generation was stronger the next one will be more. Meaning that is nothing new that generations become more and more narcissism. Especially with the fact that teenagers are changing the way of thinking as back in 1980’s teens worry more about global warming and environmental concerns. Differing from now, teenagers tend to worry about personal fears like loneliness or unemployment. Furthermore, according to Dr. Twenge the increasing of narcissism scoring higher than previous generation correlates with materialism. To sum up, generally younger generations are now much more likely to seek, for life goals, things like \"being very well off financially”. Which indicates a sign of materialism in the consistence with the rise in narcissism. This graph is indicating data accumulated over the years 1987-2006 to show how college students narcissism personality trait been developing over the years. Apart from this, I will say this graph indicates a score of 15.6 for 1982 and 17.5 for 2006.

Therefore, the graph has shown a great increase between those time frames on the college student’s narcissist personality measures. Also, if notice on the graph we can see around 30% increase after the normal curve between years 1980-1985. This means, two-thirds of recent college students are above the average in the narcissism score. This does mean that if we speculate in the future the numbers we have now from the graph we will have a greater increase than previous years because, as we can see the structure has become greater and stronger when increasing. Finally, the graph basic meaning is to have this data. So that researches can analyze data from the past, present and the future. This graph can be show to society of any scale or class and understand the way how college student’s narcissism personality is being developed. I will choose “A” because, it indicates to have a negative linear correlation. As the number for students who say are gifted percentages continue increase and we see a decrease for the test score. Making these a negative correlation for “A”. Another detail that made me choose “A” is because I can see graphically the negative relationship as one goes up the other goes down. Furthermore, I notice that the other graphs seem to be wrong because they show either an increase to increase or no correlation. By showing a relationship of no pattern or that when increasing the amount of students saying they are gifted the test score will be increasing at the same rate as well. Finally, other graphs is not true like on first paragraph in the article shows, a pattern of students increasing saying they are gifted but we see a decrease in their test scores. 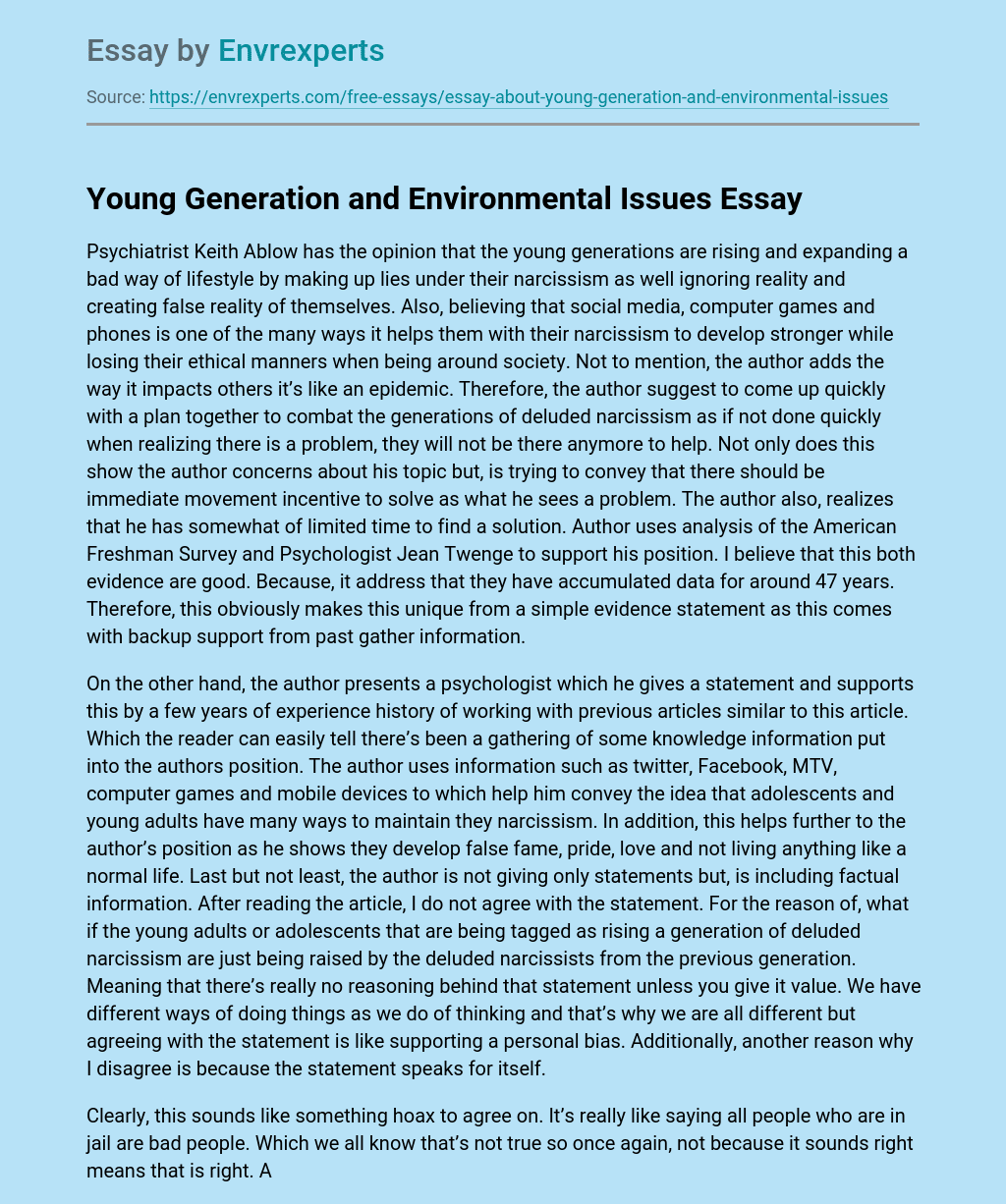